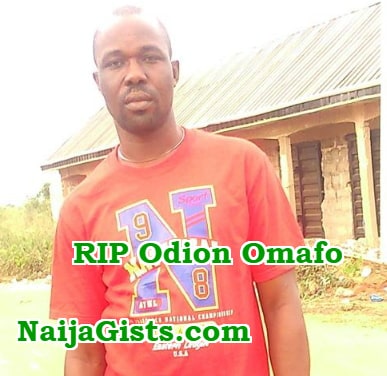 The decomposing corpse of one Odion Omafo Samuel, 36, has been exhumed from the shallow grave it was buried allegedly by four officials of the Federal Road Safety Corps (FRSC) attached to Abudu outpost in Edo State.

Names of the FRSC officials were given as Francis Igboh, Sunday Ogi, Samson Alolade and Joseph Onolade.

Police sources said preliminary investigation showed that the late Odion was beaten to death by the FRSC men because he asked the driver he hired not to give them bribe.

It was learnt that late Odion hired a driver of an Audi 80 car and they were flagged down at Okhuaihe Hill along Benin-Agbor Road October 14, 2019.

A source said Odion joined the driver to put up a resistance against alleged extortion attempts the by the FRSC officers and it led to fisticuffs.

The driver was said to have fled the scene and Odion was stabbed on the head and chest.

The FRSC officials were said to have buried him in a bush.

Another police source said the driver was arrested for kidnapping after Odion did not return home.

He was said to have told his story which led police to carry out detailed investigation and two of the four FRSC officials were arrested.

The two FRSC officers Francis Igboh and Samson Alolade took investigators to the bush where the decomposing body of Odion was evacuated.

It was learnt that the suspects accused late Odion of snatching their booking tickets.

Spokesman for Edo State Police Command, DSP Chidi Nwabuzor, confirmed the incident saying it was a case of murder.

“Our operatives in the homicide section of the State Criminal and Intelligence Investigation Department (SCIID), police headquarters, Benin City are investigating the case.

“It is a case of murder”. DSP Nwabuzor stated.