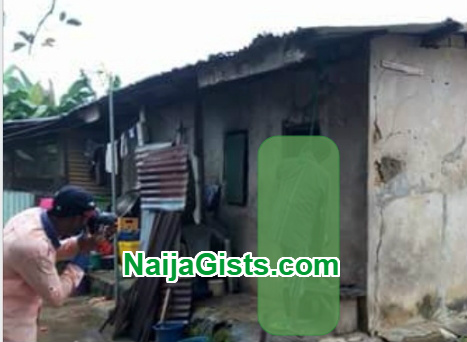 A man identified as Chief Ekanem Edet, has taken his life at Mbiabong Itam in Itu Local Government Area of Akwa Ibom State and left a suicide note blaming President Muhammadu Buhari. Residents of Mbiabong Itam were shocked to discover the body of the former secretary of the Mbiabong Village Council dangling on the suspended rope from the roof of his house.

A 50-year-old man Edet, popularly called Jolly Boy, blamed his decision to commit suicide on the prevailing hardship which had taken a toll on his life since the nation’s leaders on May 29, 2015. A few days before his death, the father of two was complaining of the current economic crunch which had impacted on the living standard of the masses.

Edet, who was selling Ogogoro (local gin), cigarettes and other stimulants, according to family source, decided to take his life when it appeared he could no longer run his small family with the meagre earnings from his business.

“He was a very sociable man and always shared his thoughts on issues. I don’t know why he should consider suicide as the last option to escape from these hard times.

Only God knows,” Okon Effiong, a close associate of the deceased, told journalists. Effiong said Edet’s body was discovered by his friend, who went to visit him that fateful day. His wife and two sons, it was gathered, had gone out at the time the man committed suicide.

“Later in the day, his friend came to check on him, only to discover that his longtime friend and confidant had killed himself,” Mfonobong Ekpe, a teacher in the neighbourhood, told our correspondent. Although our correspondent did not see the note, some relatives said the former village secretary left a suicide note blaming the president for inflicting unbearable pains and hardship on the people.

“He used to complain that his petty business was no longer fetching him enough money to take care of his basic needs such as food and clothing for his family as well as pay his children’s school fees.

“He was always blaming Buhari for his economic policies that do not allow the common people to afford basic commodities like garri, bread, yam, rice, beans, oil and kerosene and other essential goods,” Asuquo Bassey, a pastor at the local church said.

According to him, the family was reluctant to call the police when it discovered the sad incident because of the suicide note which indicated that Edet took his own life.