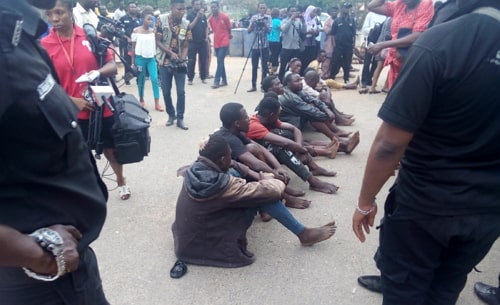 A young man identified as Musa Ahmed, a Fulani herdsman was on Wednesday paraded with human skull by the Oyo state police command . (Naija News Update)

According to the police , Ahmed who was caught with human skull at Ogbomoso area of the state by men of Igbeti Area Command led by ASP Tajudeen Toys during stop and search operation .

The human skull was found in a bag which belonged to the suspect and another passenger who is at large.

Speaking with newsmen at the Eleyele , Ibadan police headquarters , the suspect said that he was innocent of the crime and was only implicated because he is a Fulani man.

“I went to the motor park to board a car traveling to Ogbomoso from Ilesa Baruba, Kwara state.

” That was not my first time traveling through that road. I put my bags in the booth as every other person.

“When the police stopped us to check our bags, my bag was near the bag of another passenger who ran away as soon as the bags were checked.

” Three policemen ran after him but couldn’t catch him.

“So they said I knew about the skull, and I was accused because I was the only Fulani man in that vehicle.

The suspect claimed to be a farmer and a herdsman is set to be charged to court by the state criminal investigation and intelligence department, Iyaganku Ibadan.