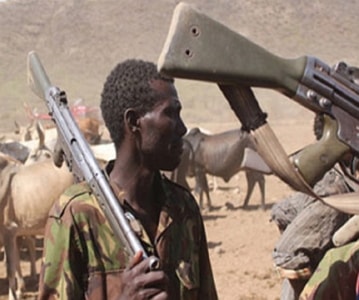 Nowadays, the day will likely not pass without seeing news like ’30 people killed in Maiduguri’ or ’20 people burnt to death in Plateau in an attack by herdsmen’, people cared not to listen to the news to avoid the gory scenes of gross inhumanity perpetrated in our dear country. The perpetrators of these heinous sins are humans, as their intentions are not clear, it is not clear whether it is blood or gin that flows in their veins.

For decades, extra-judicial killings, grievous massacres, destruction of properties, abductions and other acts of terrorism have formed the the chief cornerstones of problems for successive administrations to combat.

The days of Niger Delta militants are over, we have not seen the end of Boko Haram, although it is now a shadow of itself, the brutality of herdsmen has come to live with us, herdsmen who are supposed to feed the people have now become their killers.

Nothing justifies terrorism, not even injustice. Should we sacrifice the lives of innocent Nigerians on the altar on injustice? Do we address injustice by another gross injustice? Is there really injustice in the first place? We can bring the agitations of the Niger Delta militants within the confines of reasonableness, our country however is governed by laws and their actions remains questionable by the law.

Where do we place the agitations of Boko Haram if there are agitations at all. According to Global Terrorism Index, 2015, Boko Haram was ranked as the deadliest terror group in the world notorious for having killed thousands and displaced millions from their homes.

Besides the killings of thousands, Boko Haram will be remembered for the abduction of over 200 girls from a government secondary school in Chibok, Borno State.

A number of the girls were reported to have escaped while some were alleged to have been freed, till date the total number of girls abducted in 2014 have not regained their freedom.

Four years later over a hundred school girls still lies in captivity with their whereabouts unknown. In a similar manner, on February 19, 2018, a number of school girls were abducted from school in Dapchi, Yobe State. It was reported that one of the girls who claimed to be a christian has not been released while a total number of five might have died in detention.

The Boko Haram had been described as a jihadist organisation with a quest to establish an Islamic caliphate with a war against western education. How then do we describe the herdsmen, is it a terror institution? Who is the leader? What are its agenda and agitations? Without doubt these questions are difficult to answer.

On the 23rd June, 2018, several communities were allegedly attacked by armed herdsmen, close to a hundred people were killed, several injured and more than 50 houses were burnt. The evil acts of the herdsmen have always been based on their conflict with farmers. Following the attack on 23rd June, there is obviously more.

In a report my Premium Times, the cattle rearers association, Miyeti Allah claimed that the attacks were in response to the number of about 300 cattle lost by the herdsmen.

There has been agitations for cattle ranches, there is provision for this in the passed budget. We hope that this will put an end to all the killings.

Continue Reading
You may also like...
Related Topics:agenda, Fulani, herdsmen