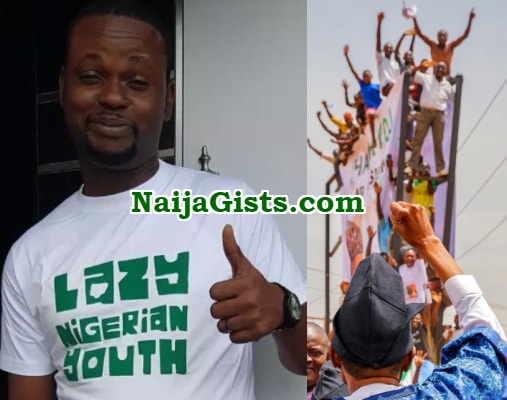 Are Nigerian Youths Really Lazy Or Is Buhari Being Mean To Them?

Following the comment of President Muhammadu Buhari in London, that Nigerian youths claimed that the country is an oil producing state and thus they should sit down and do nothing and get everything for free.

Without ‘chill’ Nigeria youths especially those who work around the clock to provide a means of survival for themselves and their family employed the social media to express not only their disagreement, but their resentment and infuriation at the president’s remarks.

The hashtag #Nigerian youths are not lazy was trending, some even shared the pictures of young people hawking on the highway in sweltering sun just to make ends meet. Some other even accused the president and his children of being lazy.

What was the intention of Mr. President, to castigate the youths or to call them to action? Much need not be said on the appropriateness of Mr President’s remarks, such comments were not supposed to be made in an international gathering. Mr. Femi Adesina in the defence of the president has opined that Mr. President never meant to say that all Nigerian youths are lazy; he only meant a percentage of them.

In the ancient city of Ibadan, as early as 4:30 am, you can sight young people who are either cab drivers or bike men ready for the day’s work. From manufacturing, to sports, fashion, banking and insurance, craftsmanship, Nigerian youths are occupying important positions. So how accurate is the assertion of Mr, President?

In a speech by Senator Abiola Ajimobi at Micro, Small and Medium Enterprises Clinic at International Conference Centre, University of Ibadan on the 25th of June, 2018 opined that is not the business of government to create jobs for its people but to create an enabling environment for people and businesses for people to thrive. Generally, the assertion of the governor might be correct but has the government performed its duty to facilitate the economic prosperity of its people.

Since the inception of Muhammadu Buhari’s administration, the rate of unemployment has increased and a number of jobs were lost in the last three years. What has been the state of our tertiary institutions that prepare young people for the real world? None of the nation’s top universities were ranked among the top 1000 universities in the world.

There are poor infrastructures, academic curricula that couldn’t address problems and loads on industrial actions. These institutions rather produce jobs seekers and not job creators. A number of young people are interested in business and entrepreneurship, how much support do they get for their business to thrive?

Is there any truth then in the president’s remarks? Truth be told, in every generation of men, there has always been a percentage of people who can be categorized as lazy, there are young Nigerians, able bodied who would prefer to take to the street to gather alms, gathering or begging alms is not only against our laws, it is belittling.

There may be some truth in the president’s remark but it lacks accuracy and appropriateness.

The Almighty Zoning Formula: One Of Many Mistakes In Nigerian Politics That Binds Us To Nightmare Of Bad Leadership
Killer Fulani Herdsmen: What Is Their Agenda & Who Are Their Sponsors?