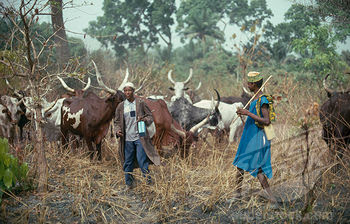 Some Fulani cattle rearers were arrested in Aboriso village, Iseyin, Oyo State, for allegedly inflicting injury on a farmer named Fatai Alimi after a disagreement over grazing on a commercial farmland belonging to Alimi and his sibling.

Brother of the injured farmer, Muibi Azeez, said the herdsmen led a large herd of cattle to the farm, which caused the destruction of crops.

He said a heated exchange ensued as Alimi challenged the herdsmen. He added that the herdsmen responded violently, and later attacked them.

Azeez said, “They came to our farm with their cattle and destroyed our crops. There was a disagreement and, in the process, my brother was seriously injured. I escaped from the scene to alert the villagers and the police.”

Police Public Relations Officer, Oyo State Police Command, Olabisi Ilobanafo, told our correspondent that the command was desirous of putting an end to frequent clashes between farmers and herdsmen in the state.

She said the Commissioner of Police, Mohammed Indabawa, had made efforts to restore peace between the herdsmen and the host community.

She said, “The clash is not peculiar to Oyo State, it is a national issue. The Commissioner of Police has called for another meeting to prevent break down of law and order in the affected area.

“We have told the farmers not to take laws into their own hands. If they use locally made guns to attack the herdsmen and in the process lives are lost, they will be arrested and charged to court for greater offence than the damage to their farms.”