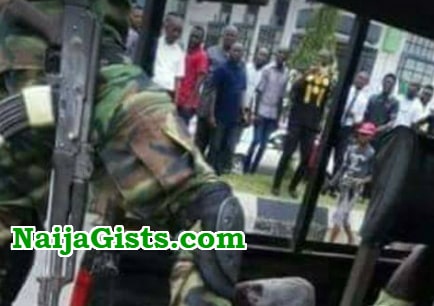 By Ochei Matthew and Theophilus Onojeghen

Abraka is the hometown of the governorship candidate of the All Progressives Congress in the March 9 governorship election in the state, Chief Great Ogboru.

Sources alleged that the farmers were shot dead after being waylaid by six gunmen around Reserve Road while returning home from their Abacha camp farms at about 7.30pm on Tuesday.

Among the victims were a 27-year-old man, Kennedy Ukuwanorvwe, two women and a young girl, whose identities could not be ascertained as of the time of filing this report.

Three other persons who also went to their farms were said to be missing as of the time of filing this report.

Sources told one of our correspondents that one of the four persons killed was a native of Obiaruku in Ukwuani LGA.

A community leader, who spoke on condition of anonymity, said, “Four persons were shot dead on their way from their farms on Tuesday evening by Fulani herdsmen. We recovered two corpses on Tuesday night and two more this morning (Wednesday).

“Reports say some farmers are still missing but we can’t confirm whether they are alive or dead. We are still searching for them.”

There has been a battle between Fulani herdsmen and farmers in the area, resulting in clashes that claimed lives.

However, the area witnessed relative peace during the elections, until Tuesday’s attack.

Efforts to speak with the state Police Public Relations Officer, Onome Onovwakpoyeya, was not successful.

However, a senior police officer at Abraka Police Station confirmed the development to one of our correspondents, saying the divisional police officer had deployed officers in the area to avoid further loss of lives.