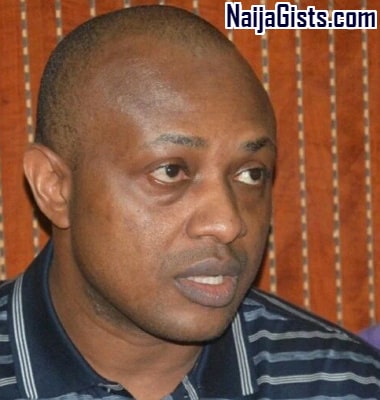 Court Strikes As Evans The Kidnapper Refuses To Hire A Lawyer

Justice Hakeem Oshodi of an Ikeja High Court has ordered alleged kidnap kingpin, Chukwudimeme Onwuamadike alias Evans and three other defendants to ensure they have legal representation by June 14.

NAN reports that the six were arraigned on Aug. 30, 2017 on two counts of conspiracy and kidnapping. According to the prosecution, they allegedly kidnapped Dunu and collected 223,000 Euros (N100m) as ransom.Evans and his co-defendants had pleaded not guilty to all the charges.

At resumption of the trial on Thursday, proceeding was stalled due to the absence of defence counsel for Evans, Amadi, Uchechukwu and Ifeanyi.

Following the development, Justice Oshodi mandated Evans and the three other defendants to ensure they have legal representation by June 14, the next adjourned date.

The judge also directed that counsel from the Office of the Public Defender (OPD) be in court on the next adjourned date to represent the defendants in case they failed to get counsel to represent them in court.

“If on the next day, the defence counsel are not around, the courts will order the defendants to either represent themselves or the court invokes Section 233(3) of the Administration of Criminal Justice Law.

“The prosecution shall also notify the Office of the Public Defender (OPD) to be in court on the next adjourned date.
“This case is adjourned to June 14 for the continuation of the evidence of PW4,” Justice Oshodi said.

Earlier during proceedings, Mr Emmanuel Ochai, the defence counsel representing Aduba (sixth defendant), told the court that other kidnap trials involving Evans have been stalled in other courts for the same reason.

“We were before your learned brother yesterday at the High Court in Igbosere and we had the same issue.

“Due to the absence of the counsel to the first (Evans) and fourth (Ifeanyi) defendants here, the matter was stalled.

“I really do not know why there is no legal representation but we as counsel to the sixth defendant (Aduba) are ready to proceed,” Ochai said.

Mr A. A Uzokwu, the counsel to the fifth defendant (Nwachukwu), also told the court that they were ready to proceed but was handicapped because of the absence of the other defence counsel.

When asked why he had no legal representation Evans told the court “I did not communicate with him.

Amadi, Uchechukwu and Ifeanyi also told the court that they had not communicated with their defence counsel.

Reacting to the absence of the defence counsels for the first to fourth defendants, Mr Y.G Oshoala a Director in the Directorate of Public Prosecutions (DPP) asked the court to appoint counsel for the defendants.

“My Lord, yesterday we were before your learned brother Justice Akintoye at the Igbosere High Court.

“The case was adjourned and that was the third adjournment granted by that court at the instance of the first defendant (Evans).

“It is a game they are playing and I pray the court assist the state and invoke Section 233(3) of the ACJL which allows the court to appoint counsel for the defendants in these circumstances.

“We brought our witness from out of jurisdiction or if the defendants so wish, they can defend themselves, it is their constitutional right,” Oshoala said.

A policeman and the fourth prosecuting witness, Insp Idowu Haruna, was in court to testify in the proceedings that was eventually stalled.