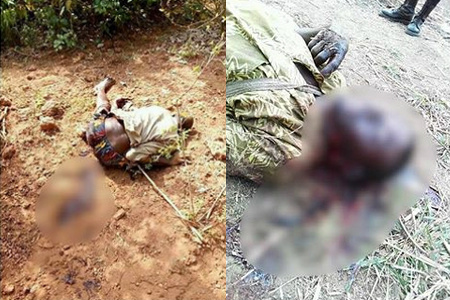 Some suspected herders have killed a farmer on his farmland in Ogun State.

The victim identified as Adetona Owolabi was allegedly killed on Thursday in his farm at Afon, Imeko-Afon local government area of the state.

The incident occurred few hours after the Ogun State Government took proactive measures to prevent clashes between herdsmen and farmers in the state.

According to local residents, the deceased was working on his farm located few metres away from the Afon bridge along Owode/Abeokuta road when he observed that herds of cattle were grazing on the farm and ate his cassava, yam and vegetables.

Eyewitnesses said the herdsmen attacked him with machetes for daring to challenge them for allowing cattle into his farmland and destroyed all the farm produce.

The victim, who was in his mid-60s, suffered cuts all over his body and bled to death before help could reach him. The attackers fled the place after the incident.

Travel Agent Arrested While Attempting To Use Forged Documents To Secure Client’s US Visa
Brazilian Doctor Who Dances With Pregnant Women To Induce Labour..Photos & Videos