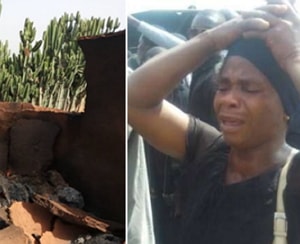 Some suspected Fulani militants have killed five people and injured three others at Inding Village in the Barkin Ladi Local Government Area of Plateau.

The Public Relations Officer of the Plateau State Command, ASP. Terna Tyopev, confirmed the development in an interview with our reporter in Jos on Monday.

Tyopev said the gunmen carried out the killing late on April 8.

“The attackers struck the village on Sunday at about 8 p.m.,’’ he said, noting that investigation had commenced to unravel those behind the killing.

Plateau and other states in North Central Nigeria have been repeatedly attacked by herdsmen in recent times, in a bloody onslaught that has left many villages desolate.

The attacks have forced thousands to stay away from their farms, raising fears that Nigeria may face food scarcity challenges in the near future, according to analysts.

Benue, the hot-bed of the attacks is cited as Nigeria’s food basket.

Invasions by the herdsmen have compounded problems in Africa’s most populous nation, which has been contending with savage attacks by the Boko Haram Islamic group for almost a decade.

The terror group has killed thousands of people and displaced millions of others in Nigeria’s northeast since 2009.

However, the Nigerian armed forces have repeatedly assured that the dreaded group has been technically defeated, although the group still packs deadly punches from time to time. [NAN]

Continue Reading
You may also like...
Related Topics:Fulani, kill, militant