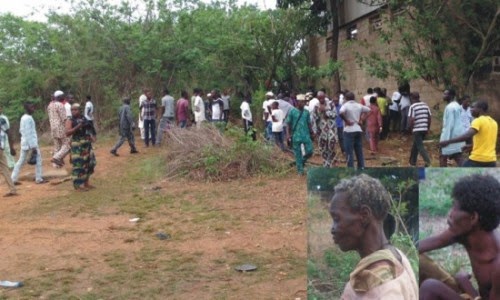 Everybody who got to the ‘evil forest’ in Ibadan, Oyo State capital where hundreds of people have been killed by kidnappers was stunned to speechlessness seeing the number of decomposed bodies of victims.

Call the place the Soka house of horror, a den of killers, the place of skull, the evil shrine, the valley of dry bones, killers’ hideouts, you will not be wrong. No adjective or description is too much to express the horror there. In the isolated bush, life is hellish, brutish, loutish and nasty. It is distasteful, barbaric and fetish. It is better read and heard than seen.

If you go there once, you could find it difficult to have your meal. Flies of different sizes and colours were feasting on the bodies. The bodies were in different positions. The odour was unbearable. The land brings to mind David’s statement when he heard about the death of his bosom friend, Jonathan, “Tell it not in Gath or publish it in the streets of Ashkelon; lest the daughters of the Philistines rejoice, lest the daughters of the uncircumcised triumph”.

Chief Isiaka Bello Olupoju, a community leader in the area who was not sure of the exact number of people killed, put the figure at about 120 persons.

Apart from the atrocities committed in the den, the incident raises a serious security concern.

A woman, who spoke in the presence of Governor Abiola Ajimobi, said the matter had been reported at Sanyo Police Station several times. She said some policemen either said the place had been set aside to take care of the destitute who had become a nuisance in the city or it didn’t fall under their jurisdiction.

Another source said they always saw some people moving up and down particularly herdsmen. He said the police should investigate the herdsmen. To fuel suspicion that the herdsmen might know something about the  killings there, a knife and a bow commonly used by cattle rearers were found close to one of the decomposed bodies. The knife was still looking fresh as at Tuesday indicating it was just dropped there.

Besides, a company populated by foreigners where the vehicles or motorcycles conveying the victims always pass should know something about the isolated bush. The building of the company is tall and so should afford the persons staying inside to have a glimpse of what is going on in the bush.

Sunday Vanguard saw the body of a woman identified simply as Kafayat, pregnant and said to be a mother of three, who was allegedly killed by an overzealous security man during the protest that followed the uncovering of the bush. She was said to have left her wares at Agodi Gate where she operated a shop to have a glimpse of the horror when she was felled by stray bullet.

Apart from seven suspects earlier arrested as confirmed by the Oyo State Police Public Relations Officer, SP Olabisi Ilobanafor, three other suspects were rounded up in the area.  Sunday Vanguard gathered from a security man that a mob made up of youths, angered that the police failed to uncover the bush of horror, was coming to set the Sanyo Police Station ablaze.

This prompted policemen to guard the station. Anybody coming from the Lagos end of the expressway towards Iwo Road without an Identity card was picked up as a suspect. An Okada man, who proved difficult for two policemen trying to pin him down, was beaten blue and black as about eight policemen descended on him with gun butts and boots.

He was thereafter arrested. Before Ajimobi got to the scene, it was gathered that five more bodies had been taken away and also a boy who was trying to dig the hall to locate some of his missing relatives was reportedly shot by security men guarding the place. When arraigned in court one day after, the court could not find any cogent reason why the suspects should be remanded in custody. They were released on bail in the sum of N100, 000 each.

How the den was discovered

After several failed attempts to find their missing ones, commercial motorcyclists, popularly called Okada riders, mobilized in hundreds and stormed the kidnappers’ den. On getting there, they raised the alarm seeing numerous bodies of victims.

When Governor Ajimobi got to the scene, the crowd was unruly. He had to talk tough to get the people to listen to him. He said, “As from today, the state government has revoked the land from its owners. We would dig all the land and expose any victims hidden in the ground. God would expose them. We, into whose hands you have entrusted the governance of this state through your votes, God will use us to punish the culprits”.

The State Commissioner of Police, Mr. Mohammed Indabawa, assured the crowd that he would do everything to get all the suspects.

Doctors at Adeoyo State Hospital, Ibadan, where victims who survived the ‘evil forest’ horror were admitted for treatment, did not allow journalists’ access to the survivors. After much pressure, the hospital officials and security men there, however, allowed some newsmen to have a brief chat with the survivors but they did not allow anybody to take pictures.

The survivors, who identified themselves as Nafiu Shittu, Michael Ola, Mrs. Titi Adeniyi, nee Dokpesi and Wale Atoyebi, gave indications that the kidnappers, who operated in the bush, capitalized on the urban renewal initiative of the Oyo government to arrest some hawkers under the pretext that they violated the state environmental law even though they did not have the authority of government to do it. Shittu recalled how he was kidnapped. He said he was selling concoction at Agodi Gate when he was accosted by some men who forced him into a waiting car.

Titi Adeniyi-nee Dokpesi said she was forced into a vehicle in front of her house and later found herself in the den.

She said, “I am from the compound of the late Baba Awolowo located in Oke Bola area of Ibadan. Some people kidnapped me while I was sitting in front of our house. Nobody was around then. My people were in Lagos. They said I was wanted somewhere and that they came to arrest me. They then took me away in their vehicle. Later, I found myself in that forest”. The survivor said she could not tell if people were being killed in the forest by the kidnappers.  ”I don’t know whether people were being killed or women giving birth. Where they kept us was where I used to be. Once I covered my head with my dress, I would sleep off”.

As if that was not enough, three human tongues were allegedly found on three men at Oni and Sons Hospital area of Ibadan in a cellophane bag. After being mobbed, the men were handed over to the police.