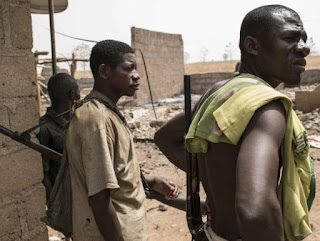 Some gunmen suspected to be Fulani terrorists went on a new rampage in Kaduna State on Friday night, killing 10 people.

The attacks which lasted all through Friday night to Saturday morning forces scores of villagers to flee into the bush.

One of the lucky escapees from Dangaji said:

“After they penetrated the village, they went to other places and burnt down houses.

“This morning (Saturday) they went to another village, Kutemechi in Unguwan Gajere where they killed about nine men. Right now, all the villagers have fled and scattered in other communities where they can find shelter.”

Another eyewitness said the terrorists fled into the bush after the arrival of military men.

Mr Ibu: I Lost N1Million Cash & N13Million Properties To Robbers During Robbery
Gifty Powers: I Married My Ex-Husband David Akumah Out Of Lust, I Went Through Hell