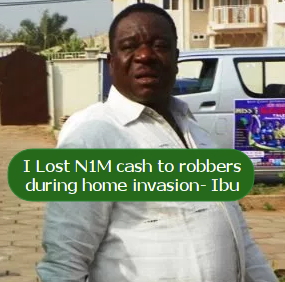 Comic Nollywood actor Mr Ibu has finally replied Nigerians questioning him over the N14million he allegedly lost to some dare devil robbers who stormed his home last weekend.

In an exclusive chat with Sunday Scoop, the actor made further clarifications.

“When I said I lost N14m, there was a misconception that it was all in cash but that was not the case.

One million naira cash, and properties worth over N13m were carted away. Some of the items the robbers stole included gold wristwatches, necklaces and jewellery. They also stole shoes belonging to me and my wife, and a lot of other items.

The trauma is still very much for my wife and kids. They are still in shock because the thieves knocked down the doors of the house and you can imagine the type of noise they would have made at the time they came, which was about 3am.”

“The total cost of all the things that were stolen is even more than the N14m that I said. I have no reasons to lie about that.”

“I live in a renowned estate for crying out loud, and we have different types of security in place. I am totally surprised as to how such an incident could have happened. Right now, I feel someone gave the robbers some information.

However, some arrests have been made already. We identified two of us those who were arrested from the CCTV footage.”