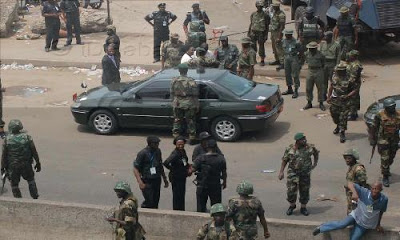 Vigilant soldiers who had been stationed at 7th Avenue Festac, Lagos State, fighting pipeline vandals since Monday, yesterday, shot dead two civilians and injured two policemen. One of the soldiers was also injured in the shooting.

The shooting spree happened moment after the soldiers received message to be at alert that robbers had attempted to rob Guaranty Trust Bank (GTB), on 23th Avenue and that another set had attacked banks at Agbara, Ogun State.

Following the clash with vandals on Monday, the soldiers had placed a barrier on the road; the barrier was to show that the area was a high security risk area and drivers were expected to slow down. The victims of yesterday shooting, however, refused to slow down at the barrier even after the soldiers repeatedly ordered them to stop.

Thinking they were criminals, the soldiers started shooting at them. When the smoke from the guns cleared, two civilians had been killed, two policemen and a soldier wounded. The incident occurred around 10:30pm. The civilian driver died instantly and a stray bullet killed another civilian who was eating noodles not far from the scene.

Two policemen were seriously injured. One was shot in the buttock and another on the knee. The soldiers so sprayed bullets that expended hundreds of ammunition littered the ground. Two police vehicles were shattered and perforated with bullets. One of the bullets bounced off a police van and hit one of the soldiers on the chest. The wounded were rushed to a nearby hospital, but rejected.

They were referred to Lagos University Teaching Hospital (LUTH), Idi-Araba. A police source said: “Surveillance men were on patrol. They sighted a Honda car. They thought the driver was a ‘yahooyahoo’ guy. The policemen were in a commercial bus as against the instruction of the Inspector General of Police (IG).

The state Police Public Relations Officer (PPRO), Joe Offor, confirmed the incident, which he described as an act of omission rather than commission.

[Reported By The Nation Online]