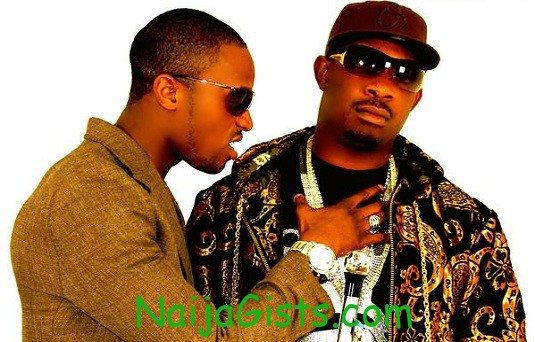 To every sad news, we believe there should be an element of fun too. naijagists.com

Listed below are some funny conversations in regards to Don Jazzy and Dbanj split.

‘My friend, will you stop this nonsense!’

‘You too, stop this nonsense. You sing your own, I sing my own, God no go vex.’

‘It is people like you that that silly boy D’banj is listening to that’s making him do all this nonsense.’

‘What nonsense did he do? It is silly people like you too that gave Jazzy the idea that there’s no D’banj without him and D’banj does not need him for anything jor. D’banj is the Koko!’

‘What nonsense koko? Where was his koko before Don Baba J put his mad beats behind him, tell me na?! So, his river now wants to forget its source, abi? And useless people like you are prodding him on!’

‘God is the only source of anybody’s success jor. Beats are 2 for 5 kobo. If it is by beats, why hasn’t he turned his brother D’Prince into a superstar, ehn, why?! Rubbish! The koko master is a man in his own right jor.’

‘You now think it’s Baba Jazzy that needs him, abi? Who is Naija’s top beatmaster? Who is responsible for the maddest beats in Africa in the last 10 years? Who got signed by G.O.O.D Music? Who tied your guy to his shoelaces and took him to America? Talk na, who?!’

‘So? So D’banj should turn his boxers to bandana because of that? Leave story for historian jor. Ehn, what artiste did your guy make major hits for before the Koko master? Is it not what an artiste brings to the table that a producer works with? Anyway, we don share garri now…make everybody find dem level. Make we see who go dey give one person 50% just like that.’

‘Oh, that’s what this is really about, ehn? Was Jazzy’s contribution not more than 50%? In fact, what percentage is D’banj’s singing inabilities? Is it not his prancing around that he sells? Nonsense. Have you thought about what this means for the industry? These guys were game-changers, you know. And what happens to the careers of people like Wande, Sid, Kay-switch etc?’

‘They should paddle their canoes jare. What if they never met D’banj and Don Jazzy, would they not have found a way to survive? And what’s that nonsense about implications for the industry? Are they the first people to break up? When Remedies broke up, who died? Plantashun Boyz nko?’

‘This isn’t on the same scale, you fool! These guys created a model a lot of young ones are looking at for inspiration. They are the strongest crew in the industry, and should have thought about that when silly things began to creep up on them. They owe it to the industry to stay together. There’s something called responsibility, you know.’

‘They don’t owe anybody anything. At least my guy doesn’t. Did the industry bring them together? And their responsibilities are to their personal realities. The industry will be just fine, thank you. Some will be grateful sef‘.

‘So why are we having this discussion then?’

‘I don’t know for you o. Sebi you were forming Voltron for some people na. So I needed to show you say no be only you fit for Voltron’.

‘Me I sha know that Don Baba J will be alright. No shaking at all at all.’

‘Me too, I know that the Koko master will be fine, very fine sef. No shaking!’