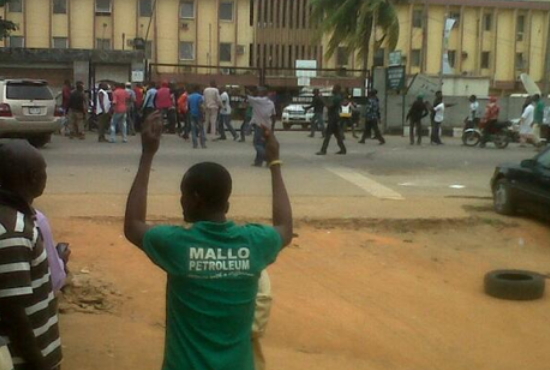 A FUTA Student has been killed untimely by a wicked Nigerian Police officer identified as Aruna Ayodele. This happened on Tuesday August 20, 2013.

The student of the Federal University of Technology of Akure in Ondo State came to Lagos to make some money because of the ongoing ASUU strike.

The 21-year-old student identified as Kunle popularly called Ifa was shot dead by a Nigerian policeman in Ikorodu area of Lagos for disobeying ban on Okada.

The extra-judicial killing of Kunle has led to a violent riot with people running for their lives.

Some angry youths attacked some motorists and burn tyres in major roads connecting to Ikorodu on Tuesday afternoon.

Officer Aruna Ayodele who claims Kunle violated Lagos traffic law took the law into his hands when he shot him dead.

The deceased who came from a poor family used the opportunity to save enough money for his education pending the end of the ongoing ASUU strike.

Since July, Nigerian higher institutions lecturers have been on strike and negotiations with the Federal Government have deadlocked.

A former e-editor for Channels TV who witnessed the whole incident took to his twitter page to reveal what actually happened.

“Breaking: Policeman kills man in Ikorodu for disobeying the ban on Okada. Scores of youth protesting in front of General Hospital at the moment
Ban on Okada: Riot in front of Ikorodu General Hospital after policeman killed young okada rider.
Ikorodu Garage boiling with gunshots between Police and Okada Riders. 2 lives lost already
Angry youth burn tyres on the street to register their grievance followig the murder of an okada rider by policeman
I just spoke with a family member of the murdered Okdada rider.
She said Kunle aka Ifa is 21 and came from FUTA to make small money
An armoured personnel carrier from Area H deplored to assist policemen on ground quail the protest in front of Ikorodu General Hospital
Two police van arrived the scene of the protest and officers were forced to release four seized okadas
the police officer that allegedly shoot the okada rider has been identified as Aruna Ayodele. He is currently at large

This killer policeman, Aruna Ayodele must be brought to justice.