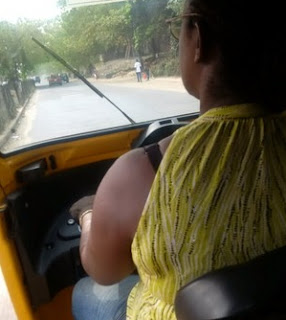 A female tricyclist, Mrs Christiana Augustine recently said it is no longer an exclusive preserve of men to make a living from operating a tricycle.

Augustine, who holds a degree in project management from the Federal University of Science and Technology Owerri, said on Tuesday in Abakaliki that her desire to become self-reliant was her motivation.

The mother of three called on other women to embrace the business, saying they could also make their own contributions towards their families’ upkeep by embarking on it.

According to her, women only need self-confidence, discipline and zeal to work hard to make their mark in the society as tricycle operators.

“My husband initially objected my involvement in the venture but I persisted to be given a chance to engage in the venture and he was later convinced.

“We are presently happy with the decision because I compliment his earnings and generally support in the family upkeep with proceeds from the keke business,” she said.

She said the involvement of many more women in the venture was only a matter of time, expressing her resolve to promote the lucrativeness of the venture to women.

Augustine pointed out that “gone was the era of relying on men for their basic requirements and getting white collar jobs on a platter of gold.

“I graduated with a degree in project management from the Federal University of Science and Technology Owerri but decided to engage in the business to be self-reliant.

“The tricycle was actually a birthday gift from my husband and I offered it to a young graduate for commercial purposes but he later returned it to me.

“I leased it to another person and when he became insincere with returns, I decided to use it myself for the Keke business,” she said.

Augustine explained that she does not operate the tricycle during odd hours no matter the situation or the number of passengers available on the road.

“My business does not affect my responsibilities towards my family as I plan my daily activities not to clash with those of my business,” she said.

A regular commuter, Ms Ifeoma Ojigwe, commended Augustine’s initiative and zeal to eke out a living in the sector in view of the high rate of unemployment in the country.

“I will consider toeing this line if I don’t get employment after my National Youth Service 2018,” she said.

Another operator, Mr. Abel Ijeaku, said he was impressed with Augustine’s attitude of being self-reliant, expressing his support for her move to attract many more women into the business.

“We also ensure that she is not intimidated by unscrupulous males in the business as her involvement in the venture automatically makes her one of us,” he said.

More in Inspiration By Funke