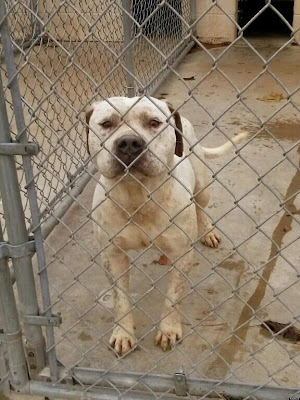 The above Pitbull dog has escaped being euthanized after his owner surrendered him to an Animal shelter in Jackson city, Tennessee for being gay. naijagists.com

According to gistxpress magazine, the  alleged gay dog is currently wasting away in an overcrowded animal shelter in Jackson,TN but is due to be euthanized unless a new owner can be found at the last minute.

According to the owner of the shelter, the dog’s master noticed him ‘hunched over’ another male dog, which led him to assume he was gay.

While dogs are known to occasionally display homosexual behavior, animal experts say a male dog mounting another male dog is not a sign of sexual orientation but rather a sign of dominance.

The dog’s fate has sparked a frantic appeal among animal lovers to find a new owner before it’s too late.

A Facebook page has been set up with the message: ‘Don’t let this gorgeous dog die bc his owner is ignorant of normal dog behavior!

Dogs hump one another. This is a fact of life. Apparently one man missed that memo, though, because he brought his American bulldog mix to the Jackson Rabies Control Animal Shelter in Tennessee to be put down because he thought the dog was gay. That really pissed off a Facebook user who goes by the name Jackson TN Euthanasia, who saved the “gay” dog with a Facebook campaign.

“This guy was signed over to RC, not bc he’s mean or bc he tears things up, but because… His owner says he’s gay! He hunched another male dog so his owner threw him away bc he refuses to have a ‘gay’ dog!” he wrote. “Even if that weren’t the most assinine thing I’ve ever heard, its still discrimination! Don’t let this gorgeous dog die bc his owner is ignorant of normal dog behavior! He’s in kennel 10L and he WILL be put down [Jan. 31] bc there is no room at the inn!”

Fortunately, a woman by the name of Stephanie Fryns, a veterinary technician affiliated with the no-kill animal shelter Woof Connections, stepped up and saved the adorable pooch. She told Daily Mail that she’s going to name him “Elton.”