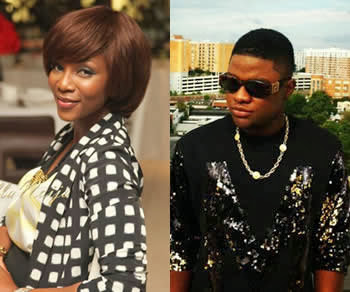 Few hours ago, a story that started from a joke website alleged that Nollywood actress Genevieve Nnaji threatened to slap EME singer Skales for being rude.

On Saturday afternoon, the star actress took to Twitter to debunk the story saying it’s a lie.

Read Genevieve Nnaji’s reply to a fan who queried her few hours ago;

Here is a copy of the false report;

The far from happy star actress issued a statement this morning to one of our reporters, and I quote: “Can you imagine that boy telling me he wants to give me the D ..what does he know, is the D sef? ..that is by the way..the next time i hear him mention my name in his lyrics again, I’m gonna give him a dirty slap, he’ll never forget..what sort of nonsense, am I his mate? how much does he have?”
Banky W was contacted but all he could say was “I told Skales..upcoming artist don’t mention her name in songs…now we have to go and beg all together….Wizkid is already buying her gifts..we cant spoil EME’s name, A slap on Skales is a slap on the whole family”

Fear not Skales aunty Genny no go slap you. She is just too mature for that.