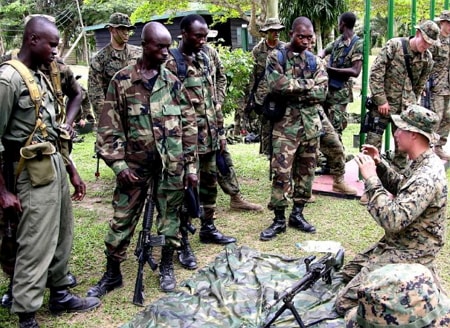 From the latest reports coming out of Ghana, and also carried by reputable international news outlets, the Ghanaian parliament has ratified a military cooperation agreement with the United States that would allow the US to station its troops and equipment in the West African country. What this means is that Ghana would permit the US to establish a military base (or bases, as the case may be) in its territory. In international relations and international law, a treaty or an agreement, once ratified by parliament, automatically becomes an integral part of a country’s law, and the obligations arising from it are binding and cannot be willfully derogated.

Now that Ghana’s national legislators have ratified it, that military cooperation agreement now has the force of law and it is binding on Ghana. Unfortunately as is always the case in the relations of developing states with the great powers of the world, Ghana is the one holding the short end of the stick. Without question, Ghana has become America’s latest colonial enclave!

Since the establishment of the US Africa Command (AFRICOM) by President George W. Bush in 2007, Washington has been surreptitiously encroaching on the defence establishments of most African states. Though Nigeria initially stiffly resisted the overtures to accept basing US troops on its soil, it was the abduction of nearly 300 teenage Chibok girls that forced it to acquiesce to some form of US military assistance. In spite of this assistance and the often secretive presence of thousands of its troops in numerous African countries, the US has been unable to persuade any of them to agree to host the headquarters of AFRICOM, which up till now remains in Stuttgart, Germany.

In the column I wrote for the Nigerian Tribune (June 17, 2014), I made it known with evidence that there was a gradual but surreptitious US re-colonization of Africa through a strategic military lockdown of the entire African continent. I had mentioned the establishment of AFRICOM and the existence of American military bases and US troops (both secretive and openly acknowledged) in no fewer than 35 African countries. Well, that figure has just increased with Ghana joining the ranks.

Though most of the finer details of the agreement are not yet well known, the reality from the little that is already in the public domain proves that Ghana has knowingly mortgaged a substantial portion of its sovereignty to the US, effectively making the independent country a modern-day, 21st Century colony. Nigeria at independence had a similarly one-sided defence agreement with its former colonial master, i.e., the infamous Anglo-Nigerian Defence Pact, but had to unilaterally abrogate it in January 1962 under sustained domestic opposition and massive pressure from the mass media, students, the labour unions and the intelligentsia, thus saving it from what was a carefully packaged neo-colonial entanglement.

Ghana has of its volition joined the ignoble company of America’s neo-colonies in Africa. How does this sound to the hearing of proud Ghanaian intelligentsia who are familiar with Kwame Nkrumah’s articulations in his Neocolonialism: the Last Stage of Imperialism that “a state in the grip of neo-colonialism is not a master of its own destiny.” Is Ghana therefore on the way to becoming the headquarters of AFRICOM which no African country had been willing to host? Though the full details and implications of this agreement are not yet known, but reports indicate that it would, amongst other things, give the US troops “unimpeded access to agreed facilities and areas to U.S. forces, their contractors and other related services.”

These facilities “for the exclusive use by U.S. troops or to be jointly used with their Ghanaian counterparts” will include “a runway that meets the requirements of United States forces,” free use of Ghana’s radio spectrum, and exemption of payment of taxes “on equipment to be imported into Ghana.” Well, since these equipment are exempted from taxes, they are also automatically exempted from Customs inspection! Wow! Additionally, Ghanaian authorities would have neither access to nor authority whatsoever over those military facilities or what goes on in there. In reality, Ghana will be host to a foreign army of occupation for the promise of a mere $20 million to be spent for training and equipping Ghana armed forces personnel. Donald Trump was probably not far off the mark when he referred to African states as shitholes! What other self-respecting country except a shithole would so casually exchange its hard won sovereignty for a mere promise of $20 million dollars, a fat chunk of which will end up in American pockets anyway.

Unfortunately, Ghanaians would not even know if and when the Americans are bringing in and stockpiling dangerous weapons in their country, nor if their country is being used for dangerous military experiments or their people as guinea-pigs for developing, testing and storage of chemical, biological and other weapons of mass extermination. Before I am accused of fear-mongering, it is a known that America has always used people of colour across the globe, even African-Americans and Indigenous Americans, as guinea-pigs for offensive chemical, biological, bacteriological, pharmaceutical and radiological weapons research and experiments. A reputable American scholar and professor of international law, Francis Anthony Boyle, who has published several books on the subject of biological warfare and terrorism, has even insinuated that the US may be directly culpable in the outbreak and spread of a genetically modified version of the Ebola virus, which ravaged West Africa from 2014 to 2015.

Once the virus began to spread uncontrollably at the time, troops from Fort Detrick in Maryland, USA, a known US facility for biological weapons programme, were swiftly deployed to West Africa, ostensibly to offer assistance! This is in addition to several US-funded secretive bio-weapons research laboratories in a number of severely exploited African countries like Guinea, Liberia and Sierra Leone where American researchers have been testing all manner of viruses and biological agents for years.

It is without question a sad turn of events, a dangerous and frankly repugnant development that Ghana, the once proud Black Star of Nkrumah’s era, the first truly Black African country to gain political independence in 1957 and gave Black Africans their pride in the community of nation-states, has become America’s latest colonial enclave in West Africa. And guess what: it is not by direct military conquest but by an insidious bilateral agreement ratified by Ghana’s own parliament that would make the country host to a foreign army of occupation! If anything, it stands as a tragic irony that this happened the same month Ghana celebrated its 61st independence anniversary.

Pray, who has bewitched the once proud and pace-setting Ghanaians into this obviously sinister neo-colonialist enslavement? Is this the land of the Ashantis who so courageously resisted colonial conquest before they were finally subdued by superior British military firepower? Was it not for the liberation of this same Ghana from colonialism that Nkrumah and several other patriotic Ghanaians had to go to jail? Can this be said to be the same Ghana of the intrepid of Kwame Nkrumah which shook the African continent in the 1960s, or a mere hideous doppelganger, a monstrous apparition? How times change and how quickly are memories erased!

[About the author: Prof Fawole is of the Obafemi Awolowo University, Ile-Ife]

Continue Reading
You may also like...
Related Topics:base, ghana, military, us

Bill Gates And The Nigerian Ostriches
Leah Sharibu: In The Forest With Christ