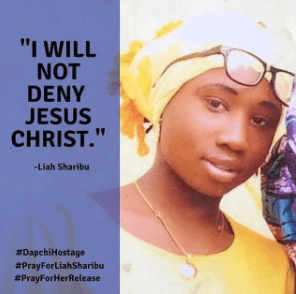 Faith is to believe what you do not see, the reward of this faith is to see what you believe” – Saint Augustine

It would be difficult for any current affair conversation to take prime place in this country ahead of the issue of the 15-year-old Nigerian girl, Miss Leah Sharibu, languishing in the forest with bandits for insisting on a faith she was brought up in by her parents for which she wholeheartedly embraced.

Not even the rebellious and trending statement from Lt. Gen. Theophilus Danjuma confirming the bias of Nigeria military on the ongoing security challenges in the country could dominate the touchy condition of the Christian schoolgirl’s catch-22.

General Danjuma indubitably one of the finest Chief of Army Staff in Nigeria history and a former Minister of Defence, dropped a ‘bomb’ into the already agitated and volatile Nigeria system when he short of calling on Nigerians to pick up arms in defence of themselves, accused the military of bias in favour of bandits terrorizing the populace across the country. He alerted Nigerians that there is a deliberate ethnic cleansing in his home state of Taraba and other riverine areas in the country and rather than show the expected neutrality, the Nigeria military instead provides cover to the gunmen.

Gen. Danjuma’s voice in Nigeria’s political and security issues is usually weighty because he is not a leader associated with frivolities. What his voice did was just to elevate the discourse of an issue that has all along remained in the realm of speculation and rumour. Nigeria military has always prided itself as symbol of Nigeria unity, that they are perhaps the most patriotic and nationalistic of all institutions in the land. But when somebody in the status of a former Army Chief, a former Defence Minister who should know publicly makes such grievous allegation, Nigeria military and its current leadership must know that they have a case to answer and should do everything humanly possible to establish their neutrality.

The onus is on the military institution to extricate and disentangle themselves from the Danjuma missile.

But as topical and germane as the Danjuma matter is, it cannot take the place of the Dapchi Christian girl even though they are related especially given the Amnesty International report that alleged that the alarm calls placed to military operatives ahead of the abduction of the girls on February 19, 2018 was disregarded by the appropriate security commands. Added to that is the curious way and manner the sect group returned the girls on a convoy of vehicles the same comfy way and manner they were taken away. Nigerians are wondering, tongues are wagging, questions are being asked by discerning minds and at such juncture an emeritus army chief in the status of Danjuma appears to provide some clues through his last weekend’s outburst.

Humanity stupidly takes this our creator for granted because of the elasticity of his mercy. If God decides to allow us enjoy some freedom we keep carrying on as if it’s by our power.

When an aeroplane crashes into the ocean and passengers drown and get eaten up by the sea sharks and amidst that a baby in the plane whose mother had drowned remains afloat until rescuers arrive to take her and you don’t know who saved the child or who sent the rescuer there, then you have some issues with faith.

The issue of faith has dominated the media space since the spectacular display by Miss Leah Sharibu of Government Girls’ Science and Technical College, Dapchi, Yobe State. We were told that negotiation for the release of the surviving girls (with five of them reportedly dead) was almost successful until something happened that one dropped. The girl, the only Christian in the group, refused to be forcefully converted to Islam.

Even when she was offered some pleasure advantage if she agrees like regaining her freedom she refused and as a punishment, they kept her back in the forest and released her colleagues. To them she does not deserve the freedom but in the spirit realm Leah is not in any form of bondage. Why, because when you are anywhere with God no matter the condition of the place you are free. When the first Christian martyrs Saint Stephen was being stoned to death he was smiling and asking God to forgive his tormentors. Stephen was seeing himself even under that condition far better than those stoning him.

Shouldn’t Leah have agreed to be converted to Islam so that on regaining her freedom she reverts to her original faith? That is the easy way every human being will reason but not when you are under the influence of a higher power wanting to use her to make a point on the issue of faith. What is faith you may ask?

Faith as in the case of the Dapch girl is unyielding and glaringly unstoppable. Faith is unrelenting. It moves mountains and overcomes obstacles. Faith is unshaken and will not be moved, no wonder Leah was unmoved even among bandits in the bush. Faith is like concrete, the longer it stands the stronger it gets. Faith makes no sense to the unfaithful.

Biblically, Jesus Christ the son of God had a very practical explanation of faith and where it can easily be domiciled – among children.

Again he says in the same Matthew 17: 20 to his disciples, “I tell you the truth if only you have faith as tiny as a mustard seed we can say to the mulberry tree be uprooted and planted in the sea or to the mountain move and it would obey you for nothing is impossible.”