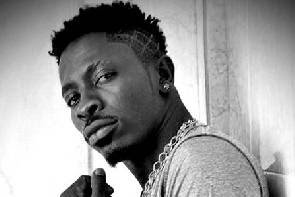 At the Ghana Music Awards that took place Saturday May 18th in Ghana,and in hand, dancehall artist, Bandana caused some commotion after losing out on the Reggae/Dancehall Song of The Year nod.

Bandana who thought he deserved the award won by Kaakie, went into ‘pissy mode’, venting that he had been robbed of his award.

He was seen angrily screaming at the lobby of the venue, where he was temporarily thrown out and detained by security.

He further went to vent his spleen on Charter House, organizers of the awards, as well as Kaakie.

He tweeted that: “F**k Ghana music industry, F**k charter house and I mean this from my heart .i don’t need them in any way ..big up to all Shatta wale fans.”

“F**king hypocrites, liars, sons and daughters of satan, I hope they sleep and don’t wake up.. Charter hose should used for a public toilet …..I don’t need any award in Gh or any nomination..f**k Gh music industry..” he added.

Bandana did not spare Kaakie, who walked away with two awards on the night. He said: “F**k khakie who can even write her own music and f**k her smelling p***y…I know how they did this…but trus mi we kno how to handle dis.”

Shatta City hit singer added that: “I pray all those who mis judge me here face the wrath of the almighty that has given me the talent and mankind is not appreciating. This time I will direct people to the nearest public toilet..charter house hahahaha ha..”

According to Bandana, known in real life as Charles Nii Armah Mensah Jnr, “I don’t need awards cuz I got my own money 3cars and a house ..f**k you all hates …foolish villagers on twitter..awards my foot. Dem no have money like me …I’ve award ago chop…all I want talk be say dem for no waste my time..fools.”

“Ano chop dis money saf finish..kwasia fuor…..no much charter house go fit pay me.. My dear God,As the rain fall and thunder strikes …I want to see all who want me fall dead by morning.Amen..if u be man try me..,” Bandana concluded.