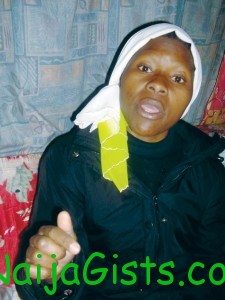 Mother of the deceased baby

On the morning of Sunday June 10, 2012, Mrs Nthabiseng lay her 6-month old baby boy down on the bed next to her. She breastfed him, watched as he went to sleep, and fell asleep herself. naijagists.com

A few hours later, she woke up to find that giant rats had been eating her boy’s face!

“My child’s mouth was covered in blood and his eyes had terrible cuts. I called an ambulance and my son was taken to Leratong Hospital,” Nthabiseng Mgangame (27) said.

But late that night she got a call that her son, Philandar, had died. The baby was buried yesterday at Lenasia cemetery. Nthabiseng and other residents said evil rats were taking over Spooktown in Bekkersdal, west of Joburg.

“They come from the graveyard and invade our shacks at night. I felt like someone was hitting me on the face. I was asleep but I tried to fight it off. Eventually I woke up and that’s when I saw cuts on my face and blood coming out of my mouth. The rats nibbled on my eyes and I could not see clearly when I woke up,” said a neighbor, Ntswaki Malomane (23) who had also been attacked by the rats.