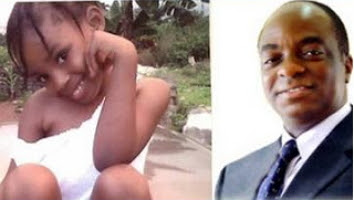 June 17, 2013 – Girl Kidnapped From Canaanland Found 2 Years After – How God Of Vengeance Struck Her Kidnapper With Blindness

Praise, a little girl who was kidnapped from the the children department of Winners Chapel , Canaanland in Ota Ogun State has been found.

On Sunday, her parents who had earlier plan to sue the church brought her to church to testify to the goodness of the Lord.

According to confession from her kidnapper, she was sold to a Kano-based woman when she was still a baby.

The kidnapper who later confessed to his crime said he saw Bishop Oyedepo pursuing him with a sword in his dream. He has been struck with a strange disease of blindness.

He asked his wife to bring him to a Winners chapel in Kano where he allegedly confessed his sins.

See the God of vengeance at work!

What an awesome God we serve.