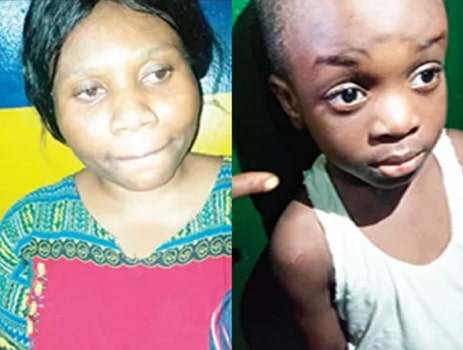 Stepmother From Hell: Woman Arrested For Torturing Girl Whose Mother Died While Giving Birth To Her

A vigilant teacher in Ogun state has rescued an innocent girl from the den of the lion.

4-year-old Stephanie Dikeocha was on Friday rescued from her wicked stepmother, Mrs Jennifer Dikeocha after her class teacher reported the matter to the police.

The class teacher of the victim at Royal Peters International Academy, Mowe, lodged complaints against the stepmother upon which the police promptly acted. The state Police Public Relations Officer (PPRO), Abimbola Oyeyemi, who confirmed the attest in a statement yesterday, disclosed that various injuries were found on the body of the little girl. According to him, the woman hails from Abia State and she married Stephanie’s father in 2016 after her the victim’s mother died while giving birth to her. The police spokesman added that as a result of the incessant maltreatment by the step-mum, the girl often dread to go home after school hours.

“The arrest of the wicked stepmother was as a result of complaints lodged at Mowe Police Station by the class teacher of the pupil who brought the little girl to the station and showed the police various body injuries on the little girl. “ T h e t e a c h e r complained that she had been noticing the reluctance of the girl to go home after closing and that the girl is in the habit of crying seriously whenever it is time for her to go home.

“She further explained that she discovered that the girl came to school that morning looking very sick and when she tried to feel her body temperature, the girl shouted in pain which prompted her to check her body and found lacerations all over the girl’s body. “

On the strength of the report, the DPO Mowe Division, CSP Francis Ebhuoma, detailed detectives to follow the girl to their house where the wicked stepmother was promptly arrested.

” When questioned about the reason for her wicked act to the innocent girl, the PPRO said the woman gave no reasonable answer. He said the Commissioner of Police, Ahmed Iliyasu, had ordered that the JWC section should conduct thorough investigation into the case with a view of prosecuting the suspect.”