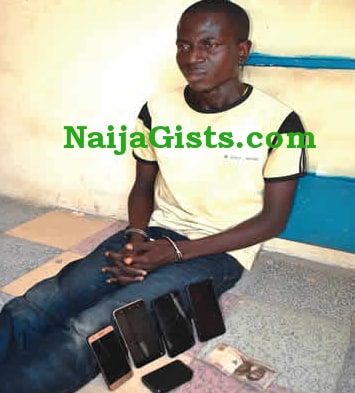 Niger state Police have apprehended a suspected burglar of IBB Guesthouse, Shango Minna, Niger State. The 26-year-old suspect, Joseph Peter, of Kuta in Shiroro Local Government Area, allegedly broke into one of the rooms in IBB Guesthouse at Shango area and carted away four phones, one power bank and N10,000. Peter was, however, trailed and arrested on Saturday by the operatives attached to Chanchaga Division on a tipoff. It was learnt that the suspect burgled the room of a woman, Oluwafunke Yusuf, from Kogi State, who was in Minna for a workshop.

According to police investigation, the suspect had been into breaking houses and shops of innocent people living in the area, especially when they have gone to work.

The suspect, a graduate of the College of Education, Minna, told our correspondent that he felt stupid breaking into people’s homes and shops, saying he had no reason for doing that. The state Police Public Relations Officer (PPRO), Muhammad Abubakar, said the operatives recovered from the suspect a Fero handset, Infinix handset, Techno K7, Gionee phone, and power bank all valued N157,600.00 as well as N10,000. He added that the matter would be charged to court after investigation.