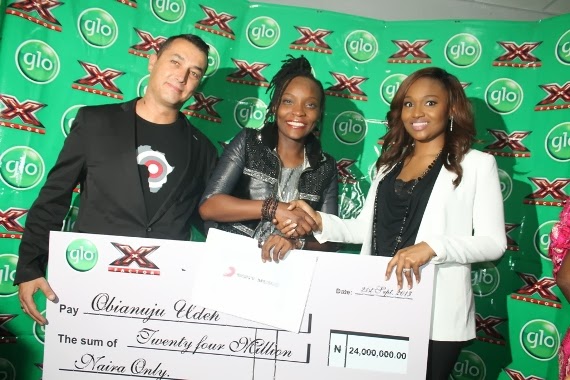 For abandoning her mother and siblings while searching for fame and fortune, fast rising rapper and winner of the maiden edition of Glo X Factor, Obianuju Catherine Udeh aka DJ Switch, has begged for forgiveness.  The 29-year-old Geology graduate of the University of Port Harcourt was declared winner of the Globacom sponsored music reality TV show at the grand finale held in Lagos and beamed to million of viewers across the continent yesterday. She beat two other contestants, Ethel Eshun and Vicky Gomoti in the last round of voting to win a whopping N24 million cash prize and a recording contract with Sony Music.

In an exclusive interview with The Entertainer, the indigene of Udi, Enugu State, said she felt bad for abandoning home for more than a year while pursuing her music career and now that she has made it, she’s asking for forgiveness. “I am sorry mum for being away from home for so long while in search of glory. Now that I am back, I will take good care of you,” DJ Switch declares in tears.

Switch likened herself to a prodigal son who got opportunities but frittered them away. “I was like a prodigal son who had an opportunity in the past but due to youthful exuberance I mismanaged the resources. Now, I am a better person and more matured, I won’t disappoint my mum and my fans.”

The rapper whose single, Landing Safely, would be released next week, vowed to continue working as long as she lives. “For me, it’s going to be work, work and work,” she promised.

Journey to fame and fortune

However, before the announcement of the results, the expectation of the audience, judges and contestants had built to a crescendo as everybody waited anxiously to find out who the first X Factor winner in Africa would be. The suspense was to last even longer as Glo ambassador from Ghana, Efya came on stage for a wonderful performance that had the audience applauding rapturously.

After her performance, X Factor host, Toolz, turned to the judges and sought to know how they felt about the night. Reggie was the first to respond, saying: “I’m so excited that I brought my wife with me so we can both be excited together. It’s been a beautiful journey; I can’t wait to see who will walk away with the money.”
On his own part, the rapper popularly known as Mr. Incredible (MI) says: “It’s been incredible. The crew; light guys, my fellow judges and the contestants have all been wonderful.”

And when Toolz asked Onyeka who she thought would be the winner that night, she answered with a smile: “I was so excited, I brought my Bible along with me. At this stage, I think the last three contestants have all won.”
Shortly afterwards, 2008 UK X Factor winner, delectable Alexandra Burke, mounted the stage for a wonderful performance that drew a resounding applause from the audience. The three finalists, DJ Switch, Eshun and Vicky later joined Burke on stage to perform Hallelujah chorus.

Flavour came on stage next to thrill the audience with a scintillating performance. The musician proved why he was a crowd favourite as people rose to their feet to sing and dance along with him. After Flavour’s performance, the contestants came out to sing the original songs they sang at the audition stage. Vicky was the first to perform and she got a standing ovation from the three judges.

“How did your daughter perform?” Toolz inquired of Onyeka.
“She has grown from a pupa to a butterfly. She sang with confidence and inner joy. I had goose pimples just listening to her. I have no doubt that she’ll make it. May God bless you,” Onyeka says.

To Reggie, Vicky just proved that “our work has not been in vain.”
And MI said: “Wow, Vicky is just so amazing. You are absolutely stunning. They way you’re radiating joy; don’t keep it to yourself, please, share with the world.”

DJ Switch
DJ Switch came up next engendering a boisterous response from the crowd with her performance of Jay Z’s Forever Young. Reacting to her performance, MI said: “Switch, people scream when you perform because you inspire us all. When you came for the audition, I felt you tried. I had already made up my mind that you wouldn’t make it to my final three mentees, but you changed my mind. Everybody here needs to know that no matter what people say about you, it doesn’t matter as long as you fight.”
Reggie gushed: “DJ Switch, you are inspirational; you excite me. My children love you; everybody loves you!”

And Onyeka opined thus: “Unlike the other judges, the moment you stepped on stage, I knew you had it.”
Eshun was the next to perform, and she pulled out all the stops as she shimmered in her green attire. “One of the best things on this programme is that I got to mentor Vicky and Eshun. She is exquisite, beautiful, gorgeous and talented. She walks onto the stage and lights it up. You have something that is very special. No matter what happens here, you have me permanently in your camp. You will take the world by storm!” Onyeka declared.

MI said: “You are a perfect example of what this show is all about. You epitomize everything X Factor stands for. You’ve been one of my favourites.”
Her Ghanaian countryman, Reggie, commented: “My story with my sister is different. We come from the same place and people expect me to give her a pass. It often seems as if I’m tough on you, but look at where you stand now. You have done well!”

The climax
It was the moment everybody has been waiting for. It was the moment when the result of the long drawn competition would be announced. As the clock ticked away, the contestants held hands as they anticipated the results that would change the life of one of them forever. Toolz invited the representative from Alexandra Forbes onto the stage, lingered a bit and teased the audience as she twirled the green envelope containing the results in her hands.

“And the first winner of the Glo X Factor West Africa is… DJ Switch!” Toolz announced as the crowd erupted in jubilation.