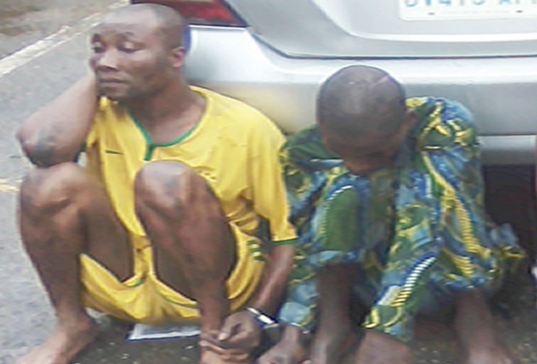 Nov 2nd, 2015 – “God Please Forgive Me & Have Mercy On Me” – Says Armed Robber Who Robbed Oshodi Lagos Trader Of N40Million

They added that the manager had earlier hired a gang to rob his female boss, but when it failed, he started looking for another gang and finally found and hired them. The suspects explained that they attacked the woman’s shop located at Oshodi Market on a day she was planning to travel to the United States. The men confessed that the robbery and subsequent location of the money inside her car boot was given to them by the victim’s manager.

Ogunseye said: “Before we were called to come and carry out the operation, we learnt that the manager had earlier contracted a gang to carry out a similar operation, but the gang failed. He later called my partner, Adetola, who invited me. The two of us went to rob her at her shop on the agreed day. I did not go with a gun.

I collected the money using charms. “When I was contacted for the operation, the manager gave me a gun, but I told him that I did not need a gun. I do not use guns. I have a charm which I believe in. I controlled the woman and collected the money from her with the charm.”
Recalling how they robbed the woman, Ogunseye said when they got to her shop, she was about to leave.

Ogunseye approached and commanded her to handover the money to him. Immediately she obliged. He added: “She opened the boot of her vehicle and handed over the money.
The money was neatly packed inside a ‘Ghana-must-go’ bag. I escaped with the money. Unfortunately

Adetola was nabbed by some of the traders in the market.” Stating his own side of the story, Adetola said: “When the manager brought the deal to me, I knew I could not carry out the operation alone.
I contacted Ogunseye to assist me with his charm. I knew he had charm. I regretted my action. God should forgive and have mercy on me. I do not want to die as a sinner.” The state Commissioner of Police, Mr Fatai

He said: “The manager of the businesswoman, who is at large, would soon be arrested by the police. The two suspects would soon be charged to court.”