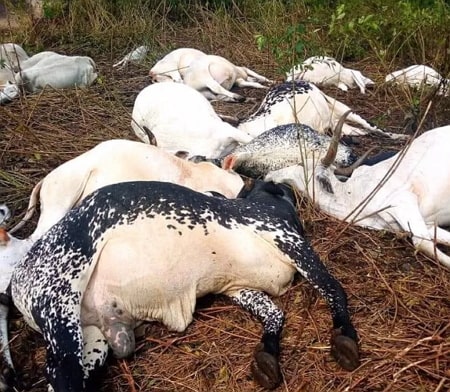 The Olujare of Ijare in Ifedore Local Government Area of Ondo State, Oba Adebamigbe Oluwagbemigun Kokotiri, has attributed the death of 36 cows on Oke-owa to an act of the gods.

The royal father told reporters that the herders refused to heed warnings to keep off the ‘sacred’ hill.

Thirty six cows died on top of the dreadful Ijare Mountain after they were allegedly hit by lightning on Saturday.

Residents claimed that the cows died after desecrating the Oke-Owa Hill, where sacrifice is made every year.

Oba Oluwagbemigun said it was against the tradition of Ijare for people to turn Oke-Owa to a grazing land.

“But what I can say is that Oke-owa is a sacred place and our people know that you can’t just go there the way you like. As the ruler of the town, l go there once in a year and l don’t even go there alone

“l go there with my chiefs and some people who are revered. There is nothing we can do than to reiterate to people; tell them how sacred the place is. My people they know this. We will keep warning them.

“To me, it is an act of God, for the thunder storms to strike. To me, what we were telling them has come to past.”

Also reacting to the incident, the Sapetu of Ijare, Chief Wemimo Olaniran said the natural occurrence, should not be allowed to cause unnecessary crisis in the community.

Olaniran, who is the prime minister of Ijare, accused the herders of desecrating Oke-Owa.

The scene of the incident has become a Mecca of sorts for people both within and outside the community.

Members of the State House of Assembly Committee on Agriculture yesterday visited Oke-Owa Hill on a fact-finding mission.

However, the place is gradually becoming unsafe due to offensive odour oozing out of the dead cows.