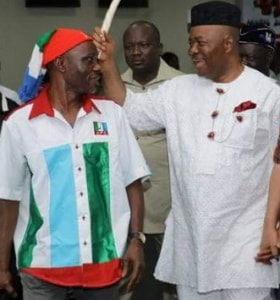 The EFCC case against corrupt Senate Minority leader, Godswill Akpabio may soon be thrown under carpet as he has embraced the ruling party just like former governor Kalu did.

Before his dramatic defection, the EFCC has been on Akpabio’s neck over N108billion corrupt charges.

Just like other corrupt politicians got their sins pardoned after defection, Akpabio is expected to receive mercy as the charges will be swept under the carpet so that when EFCC sees the broom, they will pass over him.

Akpabio who tendered his resignation letter today is expected to be received into the ruling party at a rally in Ikot Ekpene Akwa Ibom state tomorrow Wednesday the 8th of August 2018.

Until corruption is dealt with  in Nigeria, nothing will change… Let’s stop deceiving ourselves.

Continue Reading
You may also like...
Related Topics:akpabio, defects, efcc