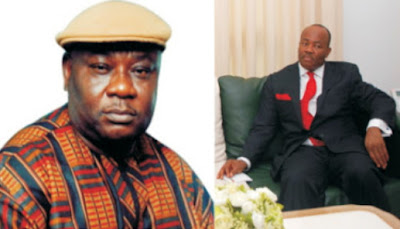 Nigerian Senator Aloysius Etok who recently benefited from election rigging has accused Akwa Ibom State’s Governor of assassination threats over his ambition to run for the state’s senatorial election in 2015.

Governor Akpabio recently declared his interest in running in 2015, an ambition which clashed with Senator Etok’s plan to run come 2015.

In a news briefing last weekend, the senator said Governor Akpabio’s killer squad has started sending him threatening text messages advising him to renounce his ambition for another term or die in 7 days.

Senator Etok further said the governor has ordered his killer squads to kill him within a week if he doesn’t retract his plan to contest for 2015 senatorial election.

Nigerian politicians and their bloody ambition… May God deliver them.