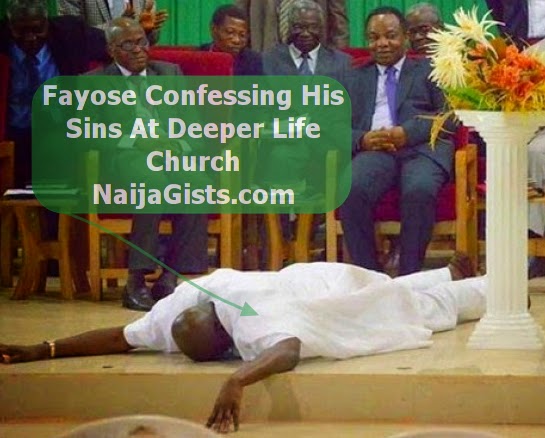 The drama going on in Ekiti state is far from over.

Few weeks after causing serious trouble for his APC opponents, the governor of Ekiti state has rededicated his life to Christ.

Fayose on his inauguration date reportedly invited juju priests, pastors and prophets to perform spiritual cleansing of the governor lodge after which he did an open house party for all Ekiti people.

The alleged trouble maker was sworn in on Thursday and rededicated his life to Christ at a Deeper Life Bible Church in Ado Ekiti on Monday.

His born again wife has been his backbone all this while. Mrs Feyisetan Fayose and her hubby today thanked God during a special thanksgiving service where Fayose rededicated his life to Christ.

During the thanksgiving service, Fayose prostrated with his face down on the altar and promised to sin no more.

If this time has been in Bible days, my name would have been one of the names to be recorded as those who God gave a second chance.

“My return to government is not common in history. It is a rare miracle. During the seven-and-a- half years of my political wilderness, I was taken to court over what I knew nothing about 59 times, aside the 45 days I spent in Ikoyi Prisons during my trial by the EFCC.

“My security aides and political aides, such as Chief Dayo Okondo, were incarcerated for three-and-a- half years without committing any offence.

“All my property was left in the Government House because I had to run for my dear life. So, this time my mission is to look after Ekiti people and not to fight anybody. I will not allow this position to go into my head or use it to oppress anybody. I don’t have anybody in mind to punish or any political battle to fight.

“I won’t take vengeance, vengeance belongs to God. Be assured I will be warm to you. But you too turn away from evil so that the state can develop.”

The governor, who expressed his belief that “God is above all,” said he had surrendered himself to His will.

He also thanked his wife for staying by him during the period of challenges with a promise to consult her any time it was necessary to do so.

“In time of challenges if you have no one to support you, you are finished,” .

His wife, Feyisetan also narrated the travail of her hubby and how God has fulfilled His promise on his life.

“God revealed to me that my husband, Mr Ayodele Fayose will return as the governor, but he never told me the time. God told me that our return would be done in such a way that will beat the people’s imagination. But because of the trouble we went through, at a time I prayed to God to please push my husband out of politics. Later, God told me that He will leave him there for Him to prove His power.

“After we left, Gen Tunji Olurin came, Segun Oni and come Governor Kayode Fayemi and today God has manifested His power. This is not by our power or strength, but by the grace of God.” – Feyisetan said

See a photo of Fayose confessing his sins at Deeper Life Church in Ado Ekiti today. 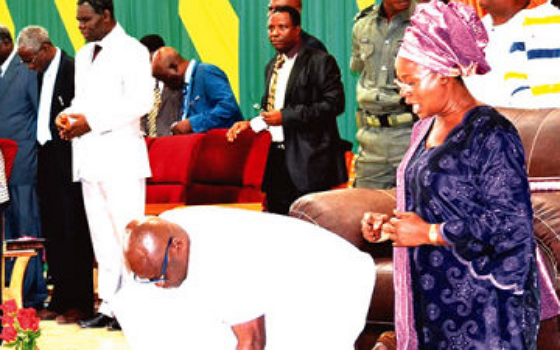 Hmmm, see the power of a praying wife.

If truly Fayose has repented, then congrats to the people of Ekiti State and The First Couple.

Video & Photos: Juliet Ibrahim & Ex-Husband Back Together, Couple Rekindles Love In Accra
Avoid Self Blame, Stop Blaming Yourself Over Past Mistakes, It Is Time To Move On