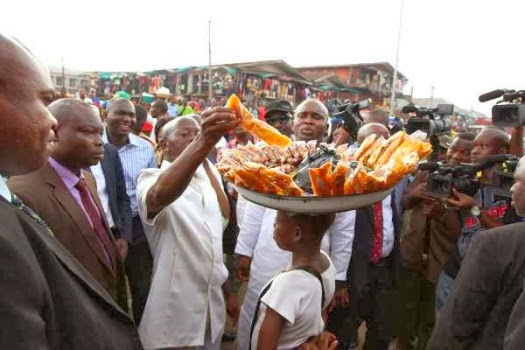 If the story making round is anything to go by, then the Governor of Edo State, Nigeria has become a nice father Christmas.

Recently the Governor was spotted by Total gas station in Benin City with his entourage.

The governor was walking about on foot while his convoy follows him.

On spotting him, some little children hawking by the road side took to their heels for the fear of being arrested but a little plantain chips hawker stood still because she was too afraid to run.

According to eyewitnesses, the Governor approached the scared little girl as everyone looked in awe. He took out his pen and check book and wrote a whopping one million naira cheque to her. He later threw her plantain chips in the air for people to catch and eat.

This story is hearsay for now as the Governor is yet to confirm or debunk it.