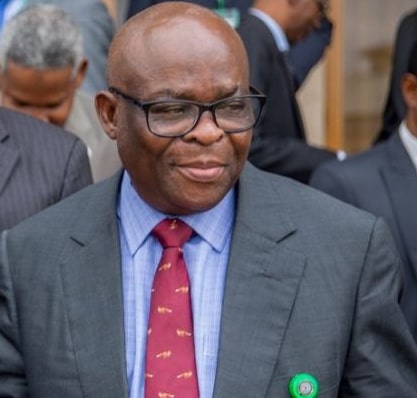 The Code of COnduct Tribunal (CCT) pronounced him guilty of violation of the Code of Conduct for Public Officers.

The CCT, in a unanimous judgment of its three-member panel, held that the prosecution proved beyond reasonable doubt, the relevant elements of the offences in the six-count charge on which Onnoghen was tried.

Onnoghen has appealed the judgment.

Tribunal Chairman Danladi Umar held, in the lead judgment, that the prosecution, led by Aliyu Umar (SAN), proved, with hard facts, devoid of technicalities, that Onnoghen made false assets declaration by deliberately omitting to declare the five domiciliary accounts he maintained with Standard Chartered Bank, and in which huge deposits were found.

Umar, who reviewed the evidence led by parties and the exhibits tendered, noted that while the prosecution established its case against the defendant, Onnoghen called only his driver as his sole witness, and in so doing, failed to discredit the evidence of the three witnesses called by the prosecution.

He agreed with the prosecution that Onnoghen’s claim, in his statement, that he forgot to declare the five accounts he opened between 2010 and 2011 in Standard Chartered Bank, which were found to have remained active since then, amounted to admittance of non-declaration and false declaration of asset.

Umar noted that since Onnoghen admitted that he forgot to declare the accounts, it means that the declaration he made was false.

“The prosecution has proved the charge any beyond any reasonable doubt. The preponderance of proof has been established against the defendant. The defendant falsely declared his asset by deliberately omitting to declare his five bank accounts, and he is found guilty of contravening the Code of Conduct for Public Officers.”

After holding that the tribunal has found the defendant guilty, the chairman asked Onnoghen’s lawyer if he had anything to say in the form of allocutus.

Lead defence lawyer, Okon Nkanu Efut (SAN) said he has nothing to say.

When Umar put the same question to Onnghen, who had all the while sat quietly in the dock, he (Onnoghen) stood up, bowed a little and said: “I have nothing to say, my lord,” and sat down.

The Tribunal Chairman resumed reading the judgment and said: “The tribunal has clearly examined the evidence of PW1, PW2 and PW3 and exhibits tendered by the prosecution, and come to the conclusion that the defendant has falsely declared his assets by deliberately omitting to declare the five accounts under consideration.

“And on that note, find the defendant guilty of the aforementioned breach of the code of conduct for public officers.

*The defendant is hereby barred from any public office for the period of 10 years.

*The money in the five accounts, which the defendant has failed to disclose and has not produced evidence as to how he amassed such amount of money not declared, the money in those accounts is hereby confiscated, seized and forfeited to the Federal Government of Nigeria as it is crystal clear that such money was acquired illegally based on the fact that the defendant has failed to produce any evidence as to how he acquired such huge sums of money in those bank accounts.”

The cash is the total sum in the five accounts which the tribunal confirmed that Onnoghen did not declare.

The case at the tribunal was “about failure to declare five accounts and alleged violation of the Code of Conduct Act.”

The account Exhibits the government presented to the tribunal were as follows: