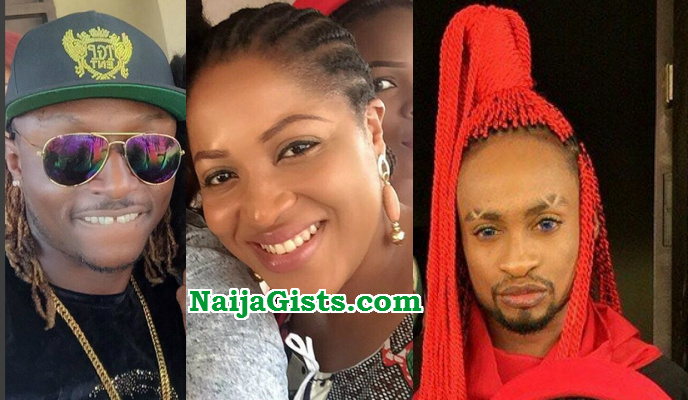 Popular musician Terry G, Channel O presenter Denrele, and Nollywood actress Grace Amah and a host of other stars were yesterday, ejected from their hotel in Abakaliki where the state government had lodged them.

The state government had staged a show at the weekend where it honoured over 50 stars of Ebonyi State extraction in the entertainment industry.

Some of those honoured are Cha Cha Ekeh, Grace Amah, and Patoranking. Several other stars, including Denrele and Terry G performed at the event.

But on Monday, some of the stars who attended the show were forcefully ejected from the Osborn La Palm, where they were lodged by the State Ministry of Tourism, organisers of the event.

The hotel is owned by the State Governor, Dave Umahi.

The stars were seen at the Government House, Abakaliki, protesting the shoddy treatment meted out to them by the state government.

They said they entered into agreement with the government to be paid a certain amount of money as appearance fee to which the state government also reneged.

According to one of the artistes, Sholade; “Instead of them to give us our return tickets and our appearance fee, they sent policemen to forcefully eject us from our hotel rooms.”

It was gathered that the two cars whose keys were handed over to Grace Amah and Patoranking by the State Deputy Governor, Kelechi Igwe at the event, have not been delivered to the artistes, as the organisers were yet to complete payment to the suppliers.

But, the Chairman of the organizing Committee, Dr Jerry Uhuo denied the allegation and blamed it on information gap between the committee and the stars.

He said, “The committee paid for four nights for the stars which elapsed today (Monday) and the stars were given tickets to go back to their bases.

“Some of them we are still processing their money and we told them so. We agreed that their consultant will stay back to collect the money while the stars leave to catch their flight.

“But surprisingly, when it was time to go, they refused to leave and instead went to government house to protest. They had already been checked out so the hotel refused to allow them back into the rooms.

“We have intervened by going to make fresh bookings for them at the hotel for those who wish to stay back.”

On the cars, Uhuo said the cars have been paid for but the Committee wanted to brand them before handing them over to Grace while Patoranking, who did not attend the event, will collect his whenever he visits the state.

“Patoranking traveled to the U.S. and he didn’t send anyone to represent him. So we reached him and he promised to come and pay a courtesy call on the governor during which we will hand over the car personally to him,” Uhuo said.