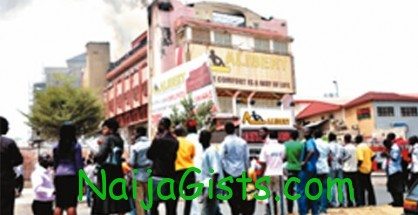 Details of the attack were sketchy, but it was learnt that the gunmen were over-powered by superior fire of a combined team of  security men on guard at the embassy located along the Diplomatic Drive, Central Business District.

According to reports, several shots were heard within the vicinity of the embassy in the afternoon, when the Ambassador was having a meeting with staff of the embassy. The internal security had to set off the alarm and got everyone to take cover.

It was gathered that as the shooting was going on everyone within the embassy ran for dear life before the situation was brought under control.  Two suspected assailants were apprehended and taken into custody at the end of the incident.

The embassy has been under heavy security watch since the attack on the United Nations Building in Abuja, last year.  It has been heavily barricaded, while fierce-looking security men keep watch around its vicinity.

A terse statement by the US authorities confirming the incident said, “we believe there were shots fired in the vicinity of the U.S. Embassy. The Nigerian authorities have two individuals in custody. We refer you to the Nigerian police for further information.”

Strangely however, the police authorities in Abuja denied knowledge of the shooting and the arrest of the two individuals at the scene of the incident.

When contacted, the FCT Police Public Relations officer, Superintendent of Police Jimoh Moshood, told reporters that some senior police officers had been dispatched to the embassy to ascertain what really happened. An Anti-Terrorist Squad and Bomb disposal units were also said to have been deployed to carry out investigations about the alleged shooting incident but they said nothing of such happened. (Vanguardngr)

Continue Reading
You may also like...
Related Topics:abuja, american embassy, Gunmen, us embassy