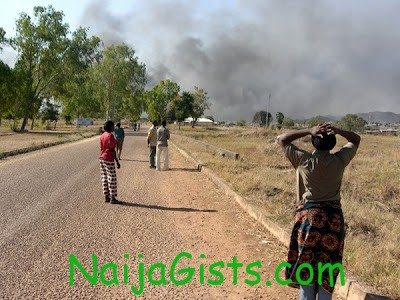 Close to 30 persons have been killed and 201  houses razed in the recent attacks by unknown gunmen in 5 villages in Bokkos and Mangu local governments of Plateau state.

The police did not, however, mention the numbers of people displaced from the 190 houses, a statement signed by the police public relations officer Assistant Superintendent of Police ASP Gabriel Agaba said out of the 190 houses razed, 67 of them belonged to Fulani residents.

“The Plateau state police command with to set the record straight in view of the recent attacks in Bokkos and Mangu local governments between 26 and 29th January 2020.

“In the attacks that happened in Bokkos, 22 people lost their lives including 14 killed in Kwatas, 4 killed in Sabon Barki, 3 killed in Marish, 2 killed in Changet. Also, 4 persons were killed in Marish Mangu LGA bringing the total numbers of death to 26.

“Arising from the crisis, a total of 190 houses were burnt including 123 owned by natives and 67 houses owned by Fulanis.

“So far, 11 persons have been arrested including ardos and community leaders. They have been moved to police force headquarters in Abuja for further investigation.

“While the police are soliciting for useful information from members of the public in respect of this unfortunate incident, The public is encouraged to remain alert and report any suspicious movement to security agencies,” the police said.