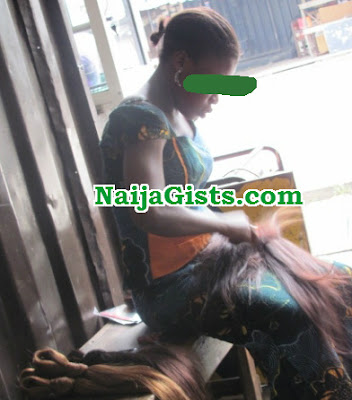 May 24, 2016 – Hairdresser In Trouble For Stealing iPhone & Dollars Of Boyfriend’s Brother In Agege Lagos

Kikelomo Fagbenro, a 26-year-old hairdresser today appeared at an Ikeja Magistrates’ Court in Lagos for allegedly stealing an Iphone valued at N200,000 belonging to her boyfriend’s brother.

Fagbenro, who resides at 12, Orelope St., off Obawole, Agege, Lagos, is being tried for stealing.

The Prosecutor, Inspector Essien Ndaraka, told the court that the accused committed the offence on May 13 at 6, Onuora close, Fagba, Agege, Lagos.

He said that the accused stole 100 dollars and an lphone valued at N200, 000 property of Mr Abdullahi Bature.

Ndarake told the court that the accused allegedly committed the offence while being a guest of the complainant.

“The complainant’s younger brother brought his girlfriend (accused) to their house just to spend the night.

“After the accused left, the complainant discovered that his 100 dollars and Iphone had disappeared from his wardrobe.
“When the accused was arrested she confessed to the police that she took the Iphone, but denied taking the 100 dollars,” he said.

Ndarake said the offence contravened Section 285 of the Criminal Law of Lagos State, 2011.
The accused, however, pleaded not guilty to the charge.

The Magistrate, Mrs E. Kubeinje, granted the accused bail in the sum of N100, 000 with two sureties in like sum.[NAN]