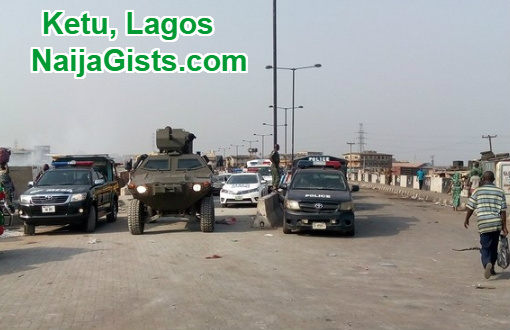 A chemist identified as Emmanuel Emeka escaped death on Sunday after some angry Hausa youths stormed his shop with dangerous weapons.

According to eyewitnesses, Mr Emeka was accused of writing a blasphemous word against Allah on an Islamic magazine which triggered the anger of an Hausa man that later informed his fellow Hausa people.

They came back in mass to kill Emeka but the timely intervention of police officials on patrol prevented the northerners from carrying out a similar jungle justice that was done in Kano and other Northern states a while back.

Eyewitnesses said police intervention prevented a bloody religious fight between Christians and Muslims in Ketu around 9pm on Sunday as many Lagosians  were determined to deal with the northerners.

The Igbo chemist was kept in Police Custody while his shop was also prevented from destruction.

Police reportedly arrested some of the blood-thirsty youths who refused to give up on their revenge mission.