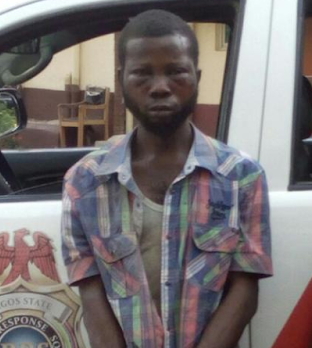 A suspected robber, Segun Taiwo, has disclosed how a herbalist gave him information on how rob an 81-year-old woman. According to Taiwo, the herbalist, who was treating the woman’s daughter, cunningly got information from his patient about her mother’s wealth and residence, and then gathered robbers to attack.

The old woman’s home was robbed at the weekend, at about 8p.m. The woman’s call for help alerted operatives of the Rapid Response Squad (RRS), Lagos, who were on patrol. They arrested Taiwo, while his accomplice escaped. When police went for the herbalist, it was discovered that he had fled his lair.

The woman was robbed on Oduduwa Street, Itire, Lagos. Taiwo said that he was invited to partake in the robbery by the herbalist, identified simply as Demola. Taiwo noted that the man promised to share whatever loot they were able to get from the woman’s apartment 50-50.

“The mastermind is a herbalist. He was treating the woman’s daughter (name withheld), who had a sore in her right foot. Whenever the patient visits him for treatment, he would ask her for information about her mother.

“Unknown to the patient, he was collecting all necessary descriptions and information needed to carry out the robbery. After a while, he told me that we have a special operation. He added that his patient must not be aware because we were going to their house to rob her mother.”

Taiwo said that the herbalist knew the exact description of the woman’s apartment, time to attack and the exact place she kept her money and valuables. He added: “We carried out the robbery successfully. We gained entry into the two-storey building and headed straight to the old woman’s flat.

From our preliminary investigation, we got to know that the first flat, opposite the entrance gate was hers. We went straight inside the flat without any stress. We met the old woman. She sat on a mat in the sitting room, praying. We dragged and threatened her with machete and axe.

We told her to surrender all her belongings, including foreign currencies or else we would waste her life.” Taiwo said the old woman cooperated with them and handed over a bag filled with both Nigerian and foreign currencies. The state Police Public Relations Officer (PPRO), Dolapo Badmos, said that the command was making effort to arrest the gang leader.