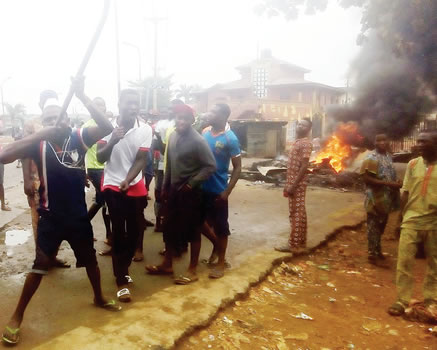 A danfo bus driver has been murdered by a food vendor in Igando area of Lagos over 30 naira debt.

The deceased, 37-year-old Olalekan Adeleke was killed on Sunday night by a Hausa road side food vendor simply identified as Adamu.

According to eyewitnesses report, the deceased fondly called Star Boy visited the suspect’s canteen at College Bus Stop around 11pm on Sunday and ordered for noodles and 2 eggs.

He was given a bill of N230 but he only had 200 on him. The suspect forcefully requested for his balance but the deceased jokingly said he should relax .

When the suspect turned the argument into a physical fight, the deceased begged to go home and get the balance of N30 but upon returning with the money, the suspect continued the fight.

He reportedly paid him the balance but while crossing the road, the suspect ran after him and hit him with a piece of wood. Olalekan fell down and died while the suspect, Adamu hid in a drainage until policemen from Igando station arrived.

The mother of the late driver said his late son was the only bread winner of the family.

She added that his death has brought back her pain of widowhood.