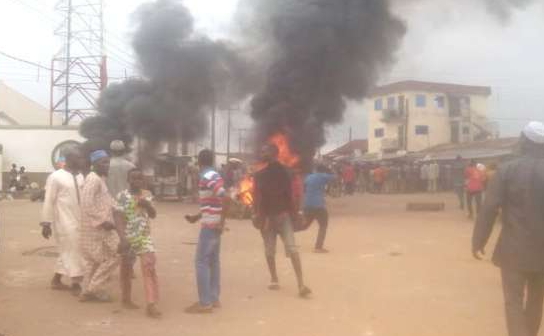 See The Cause Of Hausa & Yoruba Clash In Ile Ife

The ancient city of Ile Ife was void of peace yesterday after two ethnic groups (Yoruba and Hausas) engaged each other in a free for all fight.

We gathered that the clash was between 2 factions of NURTW (National Union of Road Transport Workers) in Ile Ife.

According to Sarun of Ile Ife, Chief Yemi Oriowo, an Hausa man reportedly slapped the wife of NURTW Vice-President (name withheld), which led to a free-for-all.

The husband of the woman allegedly challenged the Hausa man, who was said to have made fun of him.

That was how the NURTW VP ordered his boys to deal with the Hausa man.

The Hausas in the area reportedly came to the aide of the Hausa man. They reportedly fled when the Yoruba NURTW area boys overpowered them however, they came back in large number.

The Hausa boys reportedly used daggers, cutlasses, axes and guns to injure any Yoruba seen around the place.

Within 2 hours, the fight which started in Sabo has escalated to Oduduwa College street and Moore before spreading to Lagere, the commercial  hub of the ancient city.

In the process, over 10 corpses were picked up by soldiers sent to restore peace and order in the area.

Meanwhile, Ife indigenes (mainly Yorubas) protested at the Ooni’s palace yesterday calling on the monarch to rescue them from the oppression of the Hausas.

Oba Adeyeye Ogunwusi, who called for calm, appealed to the people not to take laws in their hands.

Peace has been restored to the restive city after Osun State Governor Ogbeni Rauf Aregbesola imposed a 2-day curfew in the area.

Big Brother Nigeria,BBNaija Is A Secret Cult, Kemen Was Evicted Because He Knows Their Secret
Landlady & Son Arrested For Killing Tenant Who Refused To Honour Quit Notice In Igando Lagos