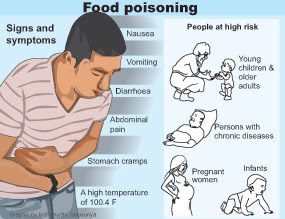 Several years ago, I had stopped over in one of the fast food chains in Lagos to eat. I had only eaten a meat pie and some gizzards. I was certain I did not consume anything else until the following day when I started vomiting with frequent bowel movements and severe abdominal pain.

It took a great medical effort to bring my health into normality. I had a repeat of the same experience within the last 36 months when I bought a piece of roast plantain on the roadside.

A female friend of mine who had just returned from the United Kingdom (UK) three weeks ago had bought some foods from a popular fast-food chain also, only to end up in our hospital facility few days after with severe vomiting, diarrhoea, abdominal pain, reduced appetite, generalised weakness and fever.

The above is a tip of the iceberg of the experience of Nigerians when it comes to food poisoning. Like malaria, food poisoning is as common, affecting both men and women, children and adult alike. Depending on the lifestyles of the individual, class of the victim may not really be of any barrier against food poisoning. I have come across professionals, bank directors, company CEOs, business owners, politicians and so forth who had suffered from various forms of food poisoning.

In the following series, I will be writing on causes of food and water poisoning focusing on the common agents such as salmonella typhi that is commonly known as Typhoid disease E.coli and other bacterial contamination of our food and drinks. Cholera is still a menace in Nigeria, breaking out occasionally in different parts of the country. Viruses and chemicals also cause food and water diseases that afflict us severely. We will also be dealing with treatment and preventions of these illnesses. For now, let us take a closer look at origin of food and water poisoning.

Causes of food and water poisoning

I will rely on World Health Organsation (WHO) for guidance on this. Credit to WHO too.

As I mentioned earlier, food and water poisoning may be caused by various agents.

Salmonella, Campylobacter, and Enterohaemorrhagic Escherichia coli are among the most common foodborne pathogens that affect millions of people annually – sometimes with severe and fatal outcomes. Symptoms are fever, headache, nausea, vomiting, abdominal pain and diarrhoea. Examples of foods involved in outbreaks of salmonellosis are eggs, poultry and other products of animal origin. Salmonellosis are not often reported or experienced in our environment unlike diseases of typhoid.

Because of its great importance in our environment and the damage it causes us, I will discuss Salmonella typhi and paratyhi (typhoid diseases) separately next week.

Listeria infection leads to unplanned abortions in pregnant women or death of newborn babies. Although disease occurrence is relatively low, listeria’s severe and sometimes fatal health consequences, particularly among infants, children and the elderly, count them among the most serious food borne infections. Listeria is found in unpasteurised dairy products and various ready-to-eat foods and can grow at refrigeration temperatures.

Vibrio cholerae infects people through contaminated water or food. Again, due to the importance of cholera in our environment, I will devote a separate article in this series on Cholera.

Meanwhile, regarding viruses, the following are the major causes of food and water poisoning. Norovirus infections are characterized by nausea, explosive vomiting, watery diarrhoea and abdominal pain. Hepatitis A virus can cause long-lasting liver disease and spreads typically through raw or undercooked seafood or contaminated raw produce. Infected food handlers are often the source of food contamination. We will examine issue of hepatitis A further in the series.

Some parasites, such as fish-borne trematodes or worms, are only transmitted through food. Others, for example tapeworms like Echinococcus spp, or Taenia solium, may infect people through food or direct contact with animals. Other parasites, such as Ascaris, Cryptosporidium, Entamoeba histolytica or Giardia (common in our environment), enter the food chain via water or soil and can contaminate fresh produce.

Of most concern for health are naturally occurring toxins and environmental pollutants. Naturally occurring toxins include mycotoxins, marine biotoxins, cyanogenic glycosides and toxins occurring in poisonous mushrooms. Staple foods like corn or cereals can contain high levels of mycotoxins, such as aflatoxin and ochratoxin, produced by mould on grain. A long-term exposure can affect the immune system and normal development, or cause cancer. Persistent organic pollutants (POPs) are compounds that accumulate in the environment and human body. Known examples are dioxins and polychlorinated biphenyls (PCBs), which are unwanted by-products of industrial processes and waste incineration. They are found worldwide in the environment and accumulate in animal food chains. Dioxins are highly toxic and can cause reproductive and developmental problems, damage the immune system, interfere with hormones and cause cancer. Heavy metals such as lead, cadmium and mercury cause neurological and kidney damage. Contamination by heavy metal in food occurs mainly through pollution of air, water and soil.

Continue Reading
You may also like...
Related Topics:bacteria, food, poisoning