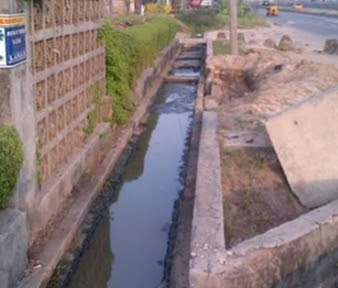 A married father of nine children, Adekunle Adewusi today appeared in an Ebute Meta Chief Magistrates’ Court for allegedly disposing his child’s remains inside a carnal.

The Prosecutor, Sgt. Kehinde Omisakin told the court that the 49-year-old father of No. 25, Folorunaho Kuku Str, Opebi, Ikeja, committed the offences on Feb. 7, at about 10.00 p.m.

Omisakin said that the corpse of the four-year-old Rachel was found inside a canal close to the residence of the accused.

“The accused in his statement claimed that the deceased was pushed on a sharp object by her playmates and because the wound was not properly treated, it developed into a big issue.

“Instead of taking the child to the hospital, he decided to do a home remedy which eventually led to her death.

“And instead of depositing the remains at the mortuary, the accused dumped her body in a canal close to his residence.

“The deceased is the sixth child of the accused and has eight other siblings,” she said.

Adewusi who is standing trial on a two-count charge of misconduct with regards to a corpse and without lawful justification in disposing a corpse pleaded not guilty.

The Magistrate, Mr A.T. Elias ordered that the prosecutor brings the other eight children of the accused and his wife so as to enable him to give his ruling on the adjourned date.

The magistrate also remanded the accused in police custody and adjourned the case till Feb. 27.

Continue Reading
You may also like...
Related Topics:man throws daughter corpse inside gutter