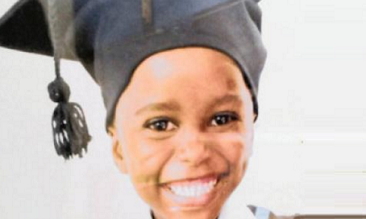 August 15, 2016 – Heartbreaking Story Of A Brave Boy Stabbed To Death While Rescuing Mother From Rapist In South Africa

An innocent 6-year-old boy has been brutally stabbed to death with a broken bottle after he tried to defend his mother who was being attacked by a man who wanted to rape her.

Kutlwano Garesape from Northern Cape was walking to school on Friday morning with his mother and his 8-year-old brother, Thabiso, when the incident occurred. His mother, Segomotso Garesape, 42, said that on Friday morning they missed the bus which she and her children usually took to the Taudiarora Primary School just outside Jan Kempdorp, where she is employed as a cook.

“I was holding Kutlwano by his left hand and Thabiso was walking behind us. I was carrying their school bags as it was quite a walk.”A man suddenly appeared “out of nowhere”.

“I heard footsteps behind me and got a fright.” She said she saw a man walking behind them, but recognised him and did not think anything of it. Thabiso was now walking behind the man and he asked me for R2 and I told him I had no money.”

Garesape said the man then stopped. “He stood still and put his hands at his sides. He looked to the sky and started shaking his head. I found it odd and told the children to hurry.

“The next moment I felt someone grab me by the shoulder, pulling on a school bag. Thabiso screaming watch out, he is going to stab you with a bottle’.”

Garesape dropped the school bag and grabbed the wrist of her attacker, preventing him from stabbing her.

“We wrestled, he tripped me and I fell to the ground. The man then pressed his knee on my chest and pinned me to the ground. He was strangling me with my jersey.
“Kutlwano slapped the man across the face and told him to let go of me. He kept on screaming let go of my mommy, it is my mommy’, while slapping and kicking the man.

The attacker slapped Kutlwano and he fell to the ground while Garesape then managed to push her attacker away. “He stumbled backwards, but came back
for me and I then kicked at him.”

The attacker then turned his anger towards her son.

“I told Thabiso to run and call for help. When Kutlwano fell to the ground, I could see that the man was strangling him. Then his arm went up and down and I realised that he was stabbing my son with the bottle.

“I heard my child crying out for me and I saw him trying to defend himself with his hands. The man just kept on stabbing him.

A group of men finally arrived to help Garesape but as they approached the attacker, he took her son towards the railway line and threw him on to the track before running off.

The man allegedly responsible for the attack was arrested after police and members of the community searched for him.