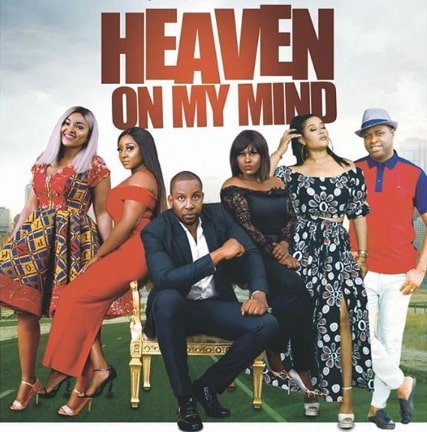 At the first private screening, in Abuja, of a new Nollywood movie, ‘Heaven On My Mind’, co-produced by famous actresses, Uche Jombo and Ini Edo, some Nigerian senators who graced the star-studded event have praised the artistes for a job well done.

Joining the cast and crew of the movie at the screening, ahead of its December 7, 2018 release date were Senator Ikechukwu Obiora who was host; Senator Joy Emodi (CON), Senator Dino Melaye, Chief Raymond Dopesi, Chief Okafor, Senator Igochuba.

According to Senator Joy Emodi, Uche and Ini are very minded individuals whose talents she believes in.
She said: “My son, Ray Emodi is also one of the actors and they all performed excellently well in the movie. It was indeed an interesting view and I can’t wait to watch more of it as they have promised to open it in cinemas nationwide on December 7.”

Senator Dino Melaye also appreciated the work, which he described as great display of intellectual mobility.
“It is very African and Nigerian,” he said. “It is a wonderful movie and it can also pass for a good comedy movie. I love it. I appreciate the quality of the movie, the actors and actresses were at their best.”

In the audience was Mrs. Ijioma Cofie-Spiff who said, “I actually laughed. Specifically, I enjoyed the Yoruba actress, Mercy Aigbe. She is, indeed, very funny. The movie generally is a good one that everyone would like to see. They really tried.”

Cofie-Spiff noted that Nollywood has improved its art, which is reflected in the outcome of ‘Heaven On My Mind’.

“Nollywood has grown and doing excellently well now compared to when they started. It has tremendously improved in terms of acting and messages. They have really done well so far,” she affirmed.

For Emeka Mbonu, “the movie was excellent, real and captivating. It passes great message to the youths and upcoming generations. More importantly, it is a good lesson for younger men who go about dating multiple women.”

Another guest, Chidi Ofondile Onyioka said: “I enjoyed myself. The film is beautiful and wonderful. I hope to watch it in a formal cinema to enjoy myself more. The producers, Ini Edo and Uche Jombo really did their best. They tried and it is a must-watch movie for all.”

This was just as another viewer, Mrs Chidia Maduekwe said, “I think the movie was captivating and interesting. I enjoyed it personally. From beginning to the end, it was quite catching, keeping someone in suspense at every stage.”

Written and directed by Uche Jombo, the film is jointly produced by Minini Empire Productions and Uche Jombo Productions.

Continue Reading
You may also like...
Related Topics:heaven on my mind movie, private screening