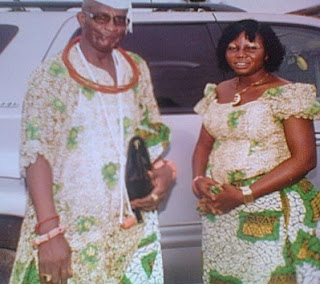 A monarch has been arrested in Delta state for killing his wife.

53-year-old Chief Michael Ikpuri, the traditional ruler of Edjeba Community in Warri South LGA of Delta state reportedly chased his 35-year-old wife, Igho Ikpurhi, a native of Ughelli area of the state as she was fleeing their home around 2am on Saturday over a lingering disagreement over the paternity of her child.

Ikpurhi allegedly shot his wife on the head around 2:0am in their at home. He later called police to report a robbery incident to them .

He alleged that some armed robbers broke into their home and shot his wife but the younger sister of the deceased told sympathizers that he was the one who shot her.