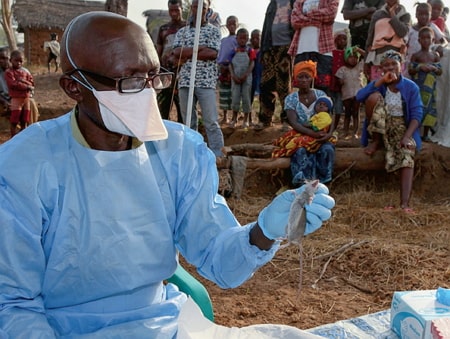 The History Of Lassa Fever In Nigeria…Treatment & Prevention Tips

There are conflicting reports on the actual number of newly confirmed cases of Lassa fever in the country. While a report says causality figure is 64, another puts it at 72.

Situation report released by the Nigeria Centre for Disease Control (NCDC) indicates that the number of deaths has reduced as the general case fatality rate (CFR) for 2020 stood at 14.7 per cent, compared to the 23.4 per cent CFR for the same period of 2019.

States affected mostly in this renewed Lassa fever insurgence are Ondo, Edo, Delta, Taraba, Plateau and Bauchi. According to NCDC, nine states have recorded at least one confirmed case in 32 Local Government Areas.

A NCDC report also states that out of the 89 per cent of all confirmed cases, Edo and Ondo recorded 38 per cent while Ebonyi recorded 11 per cent, adding that the number of suspected cases has increased, but lower than the numbers reported last year

Between January 1 and 19, a total of 398 suspected cases were reported from various states across the country, leading to 24 deaths.

From the foregoing, it is quite clear that Lassa fever remains a major public health concern in the country. The disease, which got its name from Lassa, a village in Borno, North Eastern Nigeria where it was first identified in 1969, occurs more in the dry season than the rainy season.

Lassa fever is endemic to West Africa as confirmed incidences have been recorded in Sierra Leone, Liberia, Guinea, Nigeria and Mali. However, concerns exist that there may be Lassa(-like) viruses in other countries such as Central African Republic, Ghana, Mali, Ivory Coast, Togo, Benin and Cameroon due to trans- border migration.

It is caused by a species of rodents called the Natal multimammate rat, the common African rat, or the African soft-furred rat. The Lassa virus is transmitted when the droppings, that is the urine or faeces of the rat- the natural reservoir for the virus- comes in contact with foodstuffs or in the process of the rat accessing grain stores, either in silos or in residences.

The rodents live in houses with humans and deposit excreta on floors, tables, beds and food. Consequently the virus is transmitted to humans through cuts and scratches, or inhaled via dust particles in the air. In some regions these rodents are also consumed as food. Secondary transmission of the virus between humans occurs through direct contact with infected blood or bodily secretions.

In the early stages, Lassa fever is often misdiagnosed as common cold, typhoid or malaria, and as a result many patients fail to receive appropriate medical treatment. Making a correct diagnosis of Lassa fever is made difficult by the wide spectrum of clinical effects that manifest, ranging from asymptomatic to multi-organ system failure and death.

Early signs include fever, headache and general body weakness, followed by a sore throat, nausea, vomiting, abdominal pain and diarrhea in some cases. After 4 to 7 days, many patients will start to feel better, but a small minority will present with multi-organ involvement. It can affect the gastro intestinal tract causing nausea, vomiting and stooling of blood as well as difficulty in swallowing; cardiovascular system symptoms include hypertension or hypotension as well as abnormal high heart rate and shock.

There are three ways by which the virus can be treated and also prevented from further spread. These are implementation of barrier nursing, which is isolation of victims, tracing of people that have come in contact with sufferers as well as the initiation of treatment with the only available drug, Ribavirin. The latter is only effective if administered early, within the first 6 days after disease onset.

Therefore, it is essential that preventive measures be put in place to prevent this fatal disease. Firstly, the primary source of transmitting the disease to humans should be prevented. This can be possible through avoiding contact with rats – particularly in the geographic areas where outbreaks happen. Putting food away in rat-proof containers and keeping your home clean help with discouraging rats from entering your home. Using these rats as a source of food is definitely not recommended. Trapping around and in homes, may help to reduce rat populations.

Taking preventative precautions against contact with secretions from infected persons or barrier nursing methods in form of wearing protective clothing such as masks, gowns, gloves and goggles and using infection control measures like sterilization of equipment is very important. It is vital to isolate infected people from contact with unprotected persons until the disease has run its course. It is vital to educate health care givers to protect themselves as every patient is a potential carrier.

It is imperative that people keep away from rats and report any case of persistent fever to the nearest public health facility. They are to also shun ingestion of foods and drinks infected by the saliva, urine and faeces of infected rats as well as catching and preparing infected rats as food.

They should also avoid inhaling small particles in the air contaminated with infected rat urine or droppings. Getting directly in contact with an ailing person’s blood or body fluids, through mucous membranes, like eyes, nose or mouth should also be avoided. Above all, residents should embrace faultless personal and environmental hygiene.

Also, all States’ Ministries of Health and Information have a lot to do in educating people who live in high-risk areas as well as those not presently affected about ways to lower the rat populations in their homes which will go a long way in controlling and preventing Lassa fever from gaining ground in the country.

Good personal hygiene, as well as frequent and thorough washing of hands with soap and water, is very essential. With the trend of event, we cannot afford to treat the current resurgence of Lassa fever with kid gloves.

On a final note, it is quite imperative that all stakeholders put up a common front against the spread of this disease, before it becomes a major plague.

About the author: Taiwo Ogunbiyi is of the Lagos State Ministry of Information &Strategy, Alausa, Ikeja