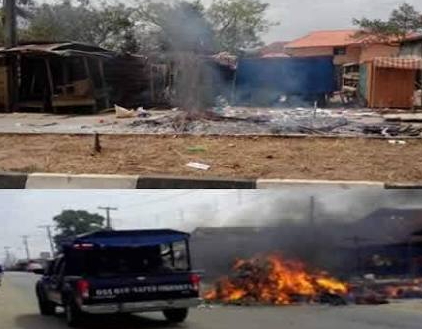 The peaceful Sabo area of the ancient town of Ile Ife experienced a major crisis last week Tuesday when a violence erupted between two major tribes that had lived together in peace and harmony for several years.

According to an eyewitness, a Yoruba shop owner at Sabo market identified as Kubura was about to close her shop on Tuesday evening around 6:30pm when an Hausa man approached her to keep his luggage in her shop but when the woman refused, he allegedly slapped her.

Kubura who was the wife of NURTW Vice President in Ile Ife contacted her husband who sent his boys to deal with the violent Hausa man for laying his hands on his wife.

The Hausa man was later beaten to stupor and locked in the shop while waiting for police arrival.

When the dust settled, the Sabo area of the ancient city became a shadow of itself.

Wasiu Ayinde K1: I Became A Millionaire At 19 While Working As Customs Clearing Agent At Apapa Wharf
Hausas Displaced During Clash With Yorubas In Ile Ife Moved To IDPs Camp Inside Ife Police HQ