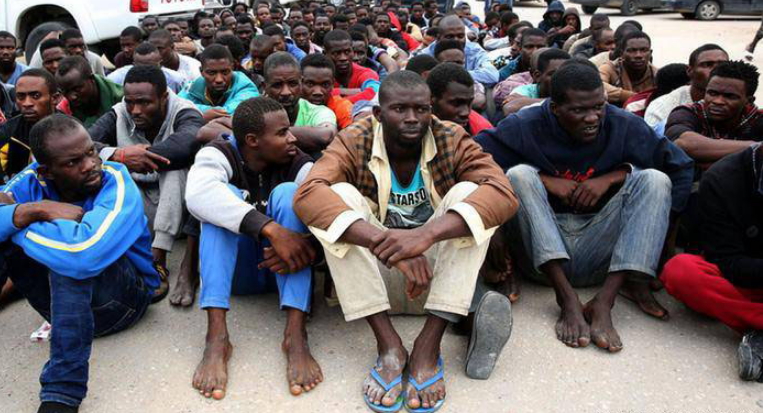 December 12, 2017 – How Desperate Africans Are Paying Their Way Into Modern Slavery In Libya

With young Africans getting entrapped into modern slavery in their desperate effort to access the glamour and economic opportunities of the developed world, I wonder what Walter Rodney, the Guyanese scholar, would say if he were alive today. In his book: How Europe underdeveloped Africa, Rodney, made succinct argument how slavery and colonialism in the previous centuries, forced Africa to its knees. His treatise showed the remarkable political and economic successes made by various ancient kingdoms in Africa, before the insidious impacts of slavery and colonisation. He argued that Europeans made a huge success of the exploitation of the human and material resources of Africa. For example, the Belgian government at a time relied solely on millions of dollars from the exploitation of the minerals resources of the Congo to survive.

He argued that Europe and America made economic transitions, literally cultivating on the back of Africans. He quoted historical data, showing the correlation between the demand for more slaves and exploitation of the rich resources of Africa with greater development in Europe and America. Before colonisation, slave trade in a way prepared Africa for conquest by the colonial powers. In depopulating Africa, slavery took her prime human assets, the young men and women that ought to be its work force and army. With firearms, Europe enforced uninterrupted supply of slaves to its plantations across America until machines were invented to supplant the need for slave hands.

Presently, Europe and America have transformed exponentially in economic and technological development while African remains the world laggard. Indeed, if Africans who were captured and transported to the slave plantations were to wake-up from the dead, they would be shocked that young men and women from Africa are now desperately paying to go into ‘modern slavery’ in Europe or America. Unfortunately, just like in the earlier slavery, the road to modern slavery is very perilous – perhaps more perilous than before. Unlike in the era of vast plantation, the present ‘Africans slaves’ are more of nuisance than assets.

From Libya, the federal government has repatriated several hundreds, even as many more hundreds are stranded, waiting to be ferried home. Yet, to pay their way to Europe, through the desert, many of these young men and women sold off their businesses, family inheritance, or prostituted for years, to raise the money. Among the returnees, there are girls with pregnancy, or with children, born out of multiple rapes. Male or female, all the returnees bear varied tales of horror, with the social media as witness.

Despite the horror tales, many more young Africans would follow the same trajectory in spite of the sad experiences of their compatriots. Again, even as Libya and the Mediterranean have become the sore point of a blighted continent, there are several thousands of Africans especially blacks, stranded in Europe and America. You see such lost generations at train stations, across Europe, trying to obtain under false pretences from their visiting compatriots.

The economic crisis facing Nigeria makes it even more likely that her share of the stranded will only increase. Significantly, while Europe and America are working hard to transit from the use of carbon fuel to electricity to power their cars, Nigeria still relies on income from petro-dollars to survive. Indeed, about 90 percent of the entire national income is predicated on the sale of crude oil. So, as the demand for our oil plummets, the tragedy of trans-Saharan slave trade will only get worse in Nigeria.

The signs are already there, with unfunded budgets and unpaid salaries and pensions across the country. Again, because oil is the main source of our nation’s income, the war to have access and control of this nation’s artery, will get worse, and will further fuel the unimaginable corruption holding our country down. Furthermore, the desperation it engenders is at the root of the do-or-die politics that makes good governance, a near impossibility, across board.

With the selected or elected few having disproportionate control over the nation’s resources, the driving force for politics, moves away from any scintilla of public service to personal or group aggrandisement. This is also the root cause of god-fatherism in politics, as those who have the capacity to promote others, in most cases promote mainly those with the capacity to feather their nest. This cycle will be difficult to break, as long as politics confers undue economic advantage to those in power.

A further tragedy is that other mineral resources, apart from oil, are also nationalised in order to cover the nation’s desperation for the oil resources. Across the country, many states cannot pay salaries even after receiving its share of the proceeds of the oil resources. Recently Africa’s richest man, Aliko Dangote, speaking metaphorically stated that Edo State is sitting on gold. The gold he referred to is probably the huge deposits of limestone, the primary raw material for cement.

The challenge faced by Nigeria is not different from that faced by other laggard African countries, and that is why her youths are desperately paying their way into slavery, in Europe. Where the mineral resources is not causing civil war, the disparate sub-national contenders for the natural resources can only be held together by force of dictatorship. Walter Rodney argues that poor leadership, particularly the trenchant variant of capitalism practised by the elite off-takers from the colonial powers are the current scourge of the continent.

To save Africa, her youths have to be saved from the death beds that the Sahara Desert and the Mediterranean Sea have become; and also the scourge of despicable inhuman organs harvesters. While our gullible youths have to be educated and if possible forced to stop their foolish desperation to go to Europe, there is the urgent need for African leaders to engineer new political, economic and social variables, if Africa, is to survive this modern tragedy.

In the meantime, the shame of stranded citizens in war torn Maghreb countries, should be quickly brought to an end. The horror films of black Africans, including Nigerians, held in sub-human conditions, allegedly in Libya, has not roused the kind of outrage, from the national governments of the victim countries, or even their fellow blacks, as the world expects. The federal government of Nigeria, must rise up to the challenge, and do whatever is needed to bring home our citizens, to wipe our collective shame.

“Football Betting Is A Great Sin In Islam” – Says Nigerian Calling For Ban Of Naija Bet In Borno State
Donald Trump: A True Friend Of Israel Or Enemy In Disguise?